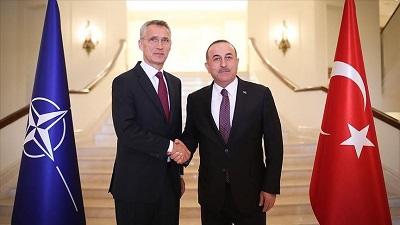 Cavusoglu and Stoltenberg gathered at the Cankaya Palace in Ankara on the occasion of NATO's 25th Mediterranean Dialogue meeting.

In a Twitter post, Cavusoglu said: "[We] made evaluations on a wide range of issues including NATO-EU relations and Turkey's S-400 purchase. Discussed the preparations of the NATO Heads of State and Government meeting to be held in London."

Speaking at the forum, Stoltenberg said NATO was determined to improve security in the Middle East and North Africa.

Stressing that the world was becoming more complicated and interconnected, he said taking precautions against terror was better than interventions.

Stoltenberg also met with Turkish President Recep Tayyip Erdogan during his visit. "Pleased to be back in Ankara to meet with [President] Erdogan," the NATO chief wrote on Twitter ahead of his meeting with the Turkish president.

"Turkey is a highly valued ally and NATO stands in solidarity with Turkey as it faces serious security challenges," Stoltenberg went on to say.