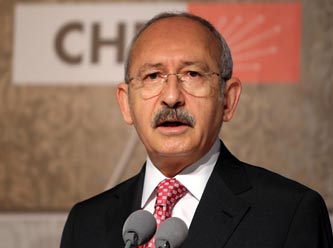 The leaders of two major Turkish opposition parties on Wednesday slammed the U.S. House of Representatives passing a resolution recognizing the so-called "Armenian genocide" as well as a bill backing sanctions on Ankara.

On Tuesday, the U.S. House of Representatives overwhelmingly passed a resolution recognizing the so-called "Armenian genocide."

"We once again strongly reject the U.S. House of Representatives resolution, and stress that decisions taken by parliaments should not cause new tensions in our region," Kemal Kilicdaroglu, leader of the Republican People's Party (CHP), said in a written statement.

The decision not only affects Turkish-U.S. relations, but will also hurt Turkish-Armenian relations, he added.

The ties of alliance, friendship, and strategic partnership between Turkey and the U.S. are heavily damaged, he added.

Turkey earlier on Wednesday summoned the U.S. ambassador in Ankara to condemn the move.

Turkey's position on the events of 1915 is that the deaths of Armenians in eastern Anatolia took place when some sided with invading Russians and revolted against Ottoman forces. A subsequent relocation of Armenians resulted in numerous casualties.

Turkey objects to the presentation of the incidents as "genocide" but describes the 1915 events as a tragedy in which both sides suffered casualties.

Ankara has repeatedly proposed the creation of a joint commission of historians from Turkey and Armenia plus international experts to examine the issue.

The House on Tuesday also passed a bill to impose sanctions on Turkey over its Operation Peace Spring in northern Syria, which was launched to clear the region of terrorist elements and help repatriate Syrian refugees in Turkey there.

"We strongly condemn the passage of a bill that envisages sanctions against Turkey on the basis of Operation Peace Spring in the U.S. House of Representatives today,” the Turkish Foreign Ministry said in a statement.