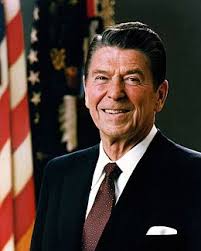 In a recently emerged audio recording from 1971, then-California Governor Ronald Reagan can he heard disparaging African delegates to the United Nations as “monkeys” during a phone call with U.S. President Richard Nixon.

Axar.az reports citing Reuter that the previously undisclosed recording followed a move by the United Nations to expel Taiwan, something the United States had opposed.

“To see those monkeys from those African countries damn them,” Reagan can be heard saying, prompting laughter from Nixon. “They are still uncomfortable wearing shoes.”

The conversation was published this week by the Atlantic magazine. The article was written by Tim Naftali, a history professor at New York University and former director of the Nixon Presidential Library.

After Reagan’s death in 2004, Naftali was successful in getting the National Archives to release the full recording.

“It was worse than I expected,” Naftali told The Washington Post, referring to the audio on the tape. “It was the combination of the slur by Reagan and then Nixon’s repeating it, not once but twice in later conversations.”

Nixon left office in 1974, the only U.S. president to resign, in the face of almost-certain impeachment over the Watergate scandal. He died in April 1994.