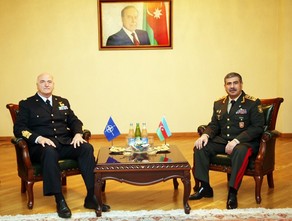 On March 9, Azerbaijani Defense Minister, Colonel General Zakir Hasanov has met with the delegation, led by General Mirco Zuliani, NATO Deputy Supreme Allied Commander Transformation, who is on visit to the country.

Touching upon military-political situation in the region, Defense Minister drew attention that occupier Armenia is a serious threat to peace, stability and security in the region and therefore majority of the country's defense resources aimed at preventing the enemy's aggressive policy.

Highly appreciating NATO-Azerbaijan relations, General M.Zuliani expressed his gratitude to the Azerbaijani side for contribution of Azerbaijani peacekeepers to the international security in the framework of the operations in Afghanistan as well as for active participation in the Operational Capabilities Concept (OCC).

The meeting has covered wide exchange of views on partnership issues on operation, training, military education, exchange of experiences and other fields within existing programs between Azerbaijan and the NATO.