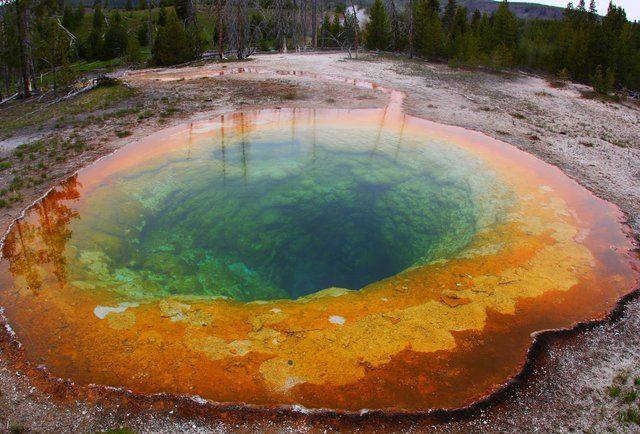 A Portland, Oregon man who was hoping to bathe in a hot pool in Yellowstone National Park died and was dissolved when he fell into the park's boiling, acidic Norris Geyser Basin, park officials have disclosed.

On a college graduation trip, Colin Scott, 23, and his sister were looking for a place to "hot pot," or soak in the steaming waters -- a practice the national park forbids. A report on the June 7th accident, obtained under a Freedom of Information Act request by KULR-TV, quoted Scott's sister, Sable Scott, as saying "her brother was reaching down to check the temperature of a hot spring when he slipped and fell into the pool." She tried to rescue her brother, unsuccessfully. She was recording with her cellphone when he fell; the incident was captured on video.

Sable Scott notified park authorities, who sent a search and rescue team that was thwarted by a lightning storm. They couldn't recover her brother's body from the pool, and upon returning the next day, found that the acidic waters had disintegrated the body.

"In a very short order, there was a significant amount of dissolving," Deputy Chief Ranger Lorant Veress said.

Scott was not the first person to attempt to bathe in the park's waters to nasty effect. Yellowstone's website lays out a series of cautionary tales, describing horrific stories of children who burn themselves and the 20 people before Scott who have died in the park's boiling waters, the last one in 2000. Per the site: "The victims include seven young children who slipped away from parents, teenagers who fell through thin surface crust, fishermen who inadvertently stepped into hot springs near Yellowstone Lake, and park concession employees who illegally took 'hot pot' swims in thermal pools."

Veress told KULR that the park encloses those pools for the protection of the fragile natural environment in those areas. "But most importantly," the deputy ranger said, "for the safety of people, because it’s a very unforgiving environment."