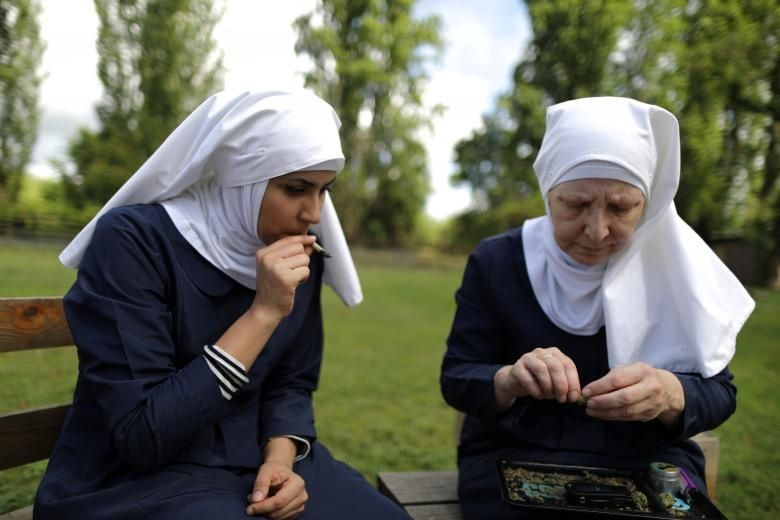 Meet the Sisters of the Valley: a woman-led health activism group in California that provides patients with marijuana products to help them with pain.

Dubbed the “weed nuns,” they describe themselves as activists who “insert prayer and healing into every bottle and jar.” The nuns, who call marijuana their Holy Trinity, use strains of marijuana with low levels of tetrahydrocannabinol, THC, to treat their patients.

Customer reviews on their website reveal how women are benefitting from their services.

“I wholeheartedly recommend this Cannabis Salve for chronic back pain. It gives me rapid relief after many years of suffering,” wrote one unnamed customer.

“I'm legally blind, disabled from a botched brain surgery, and I get debilitating grand mal seizures and late-stage endometriosis,” wrote Shanie Cognevich‎ on their Facebook page.

The Sisters of the Valley told Reuters that U.S. President Donald Trump’s administration has strengthened their resolve to help women with their products, given his opposition to preserving women’s health programs.

The sisters harvest their cannabis plants in the town of Merced in the Central Valley. The 7-member group turn hemp into cannabis-based balms and ointments. In 2016, they made sales worth $750,000, the most since they started selling products in January 2015.

Despite using nun personas, they don't belong to any order of the Catholic Church.

“We're against religion, so we're not a religion,” Sister Kate, one of the organization’s founders, told Reuters.

“We consider ourselves Beguine revivalists, and we reach back to pre-Christian practices.”

Sisters of the Valley were founded in 2014.