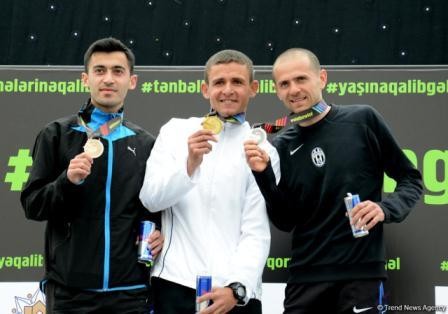 The award ceremony of the winners of the Baku Marathon 2016, organized by the Heydar Aliyev Foundation, was held May 1.

Namig Asadov won the men's race as part of the marathon, while the Georgian national Georgi Damenia, and Tural Sadigli came in second and third, respectively.

Rahida Aslanova won the women's race as part of the Baku Marathon, and the British national Natasha Peterson, and Reksane Rajabli came in second and third, respectively.

The marathon winner was awarded a prize of 3,000 manats, while those coming in second and third got 2,000 manats and 1,000 manats, respectively.

Over 5,000 participants attended the event. Besides Azerbaijani citizens, up to 500 foreigners, living and working in the country, joined the marathon.

Among the participants are people of various ages. The youngest participant is 16 years old, while the oldest one - 62 years old.

The Baku Marathon 2016 was organized at the initiative of the Heydar Aliyev Foundation.

The course of the marathon covered a distance of 21 kilometers from its start point at the Flag Square to the finish line at the Baku Olympic Stadium.

Zemfira Meftahetdinova, Olympic and world champion, made an opening shot at the marathon.

The marathon started at 10:00 (UTC/GMT +4 hours). It took a maximum of four hours and a half to overcome a 21 kilometer-distance.