US companies participate IN AGRICULTURE Exhibition 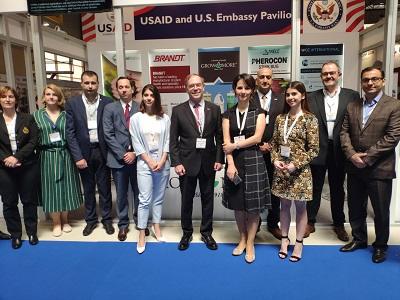 The companies and their products will be featured at a pavilion sponsored by the United States Agency for International Development (USAID) and the U.S. Embassy at the 13th Azerbaijan International Agriculture Exhibition, Caspian Agro. The nine companies include Brandt, Soil Biotics, Trece, Grow More, DTN, Nelson & Pade, Inc., Valent BioSciences, Harvest Right, LLC and WCC International.

USAID and the U.S. Embassy have partnered with Azerbaijan in the agriculture sector for almost 20 years, supporting government and citizen-led efforts to transform the sector into a prosperous and stabilizing force in the economy. In the past five years, local agribusinesses working with USAID have increased their exports by $60 million and expanded to high-paying markets in Europe and the Gulf. USAID is expanding partnerships with the government and private sector, in and beyond the agricultural sector, to facilitate linkages between U.S. and Azerbaijani businesses, attract more U.S. investment, and engage the innovation of Azerbaijan’s entrepreneurs to further diversify the economy.