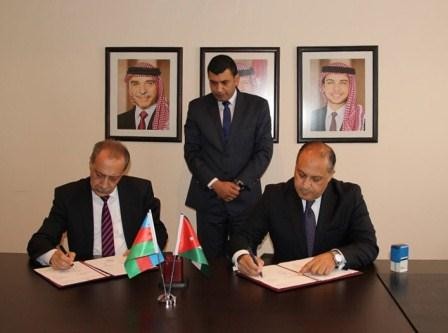 The Embassy of the Hashemite Kingdom of Jordan to Azerbaijan and the Knowledge Foundation under the President of the Republic of Azerbaijan have signed a Memorandum of Understanding (MoU).

The MoU was inked by Jordan's Ambassador Mohammad Nassar Ibrahim al-Habashneh and executive director of the Foundation Ogtay Samadov.

The document aims to support and develop cooperation between the Embassy and the Foundation in the fields of science, education and culture.

Addressing the signing ceremony, the Jordanian diplomat hailed the diplomatic relations between the two countries, underlined the establishment of successful cooperation in political, economic, educational and other spheres. He emphasized that the signed document would give impetus to the implementation of joint educational projects.

Recalling the Framework Agreement on cooperation between the Azerbaijan Republic and the Government of the Kingdom of Jordan, Ogtay Samadov expressed his confidence that the MoU would significantly contribute to cooperation in the field of education between the foundation and the Embassy.