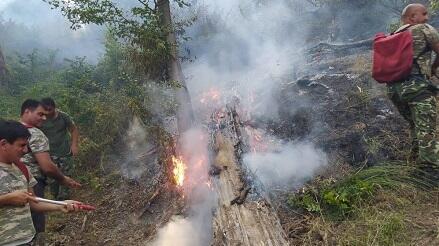 A fire broke out in a forest in the Milas region of Turkey's Mugla province, causing a fire at the Kemarkoy Thermal Power Plant (TPP).

Axar.az reports that the press service of the Ministry of Emergency Situations (MES) told that the fire and rescue forces of the MES in Turkey together with local forces managed to extinguish the fire at the thermal power plant on August 5 in the morning. This prevented the fire from spreading to the nearby Yenikoy thermal power plant.

Taking into account the strategic role of both thermal power plants in the supply of electricity to the region, Kemarkoy and Yenikoy stations were protected from fire by the forces of the Ministry of Emergency Situations of Azerbaijan. In this regard, Deputy Minister Lieutenant General Etibar Mirzayev, who heads the forces of the Ministry of Emergency Situations in Turkey, met with local officials to organize reliable fire protection of stations. The sides exchanged views in this direction and discussed preventive steps to be taken.

It should be noted that in accordance with the instructions of the President of the Republic of Azerbaijan Ilham Aliyev, the relevant forces of the Ministry of Emergency Situations sent to Turkey are currently successfully fighting fires in the brotherly country.