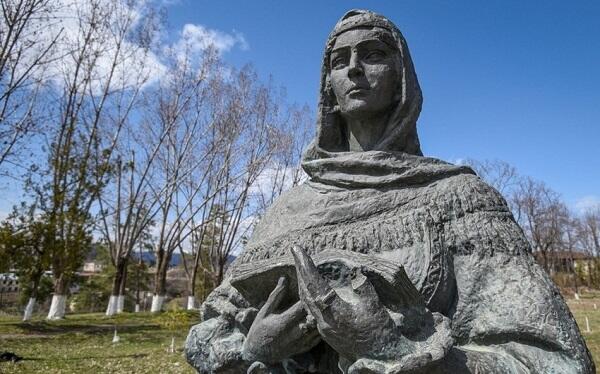 Axar.az reports that President Ilham Aliyev and First Lady Mehriban Aliyeva took the white cover over the grave monument of Khurshidbanu Natavan and placed flowers in front of it.

It should be noted that by the order of President Ilham Aliyev dated March 14, 2022, taking into account the 190th anniversary of Khurshidbanu Natavan this year, the Ministry of Culture has started work on the restoration of the monument on the grave.

The poetess's gravestone monument was made by sculptor Kenan Aliyev, 350 centimeters high, from gray granite material based on its original appearance and installed in its previous place. Rafi Zeynalov, who did the stone carving of the gravestone monument erected in Aghdam in 1982 and authored by Eljan Shamilov, carved stone for the preparation of the same monument 40 years later. A short film was made in which Rafi Zeynalov shared his memories.