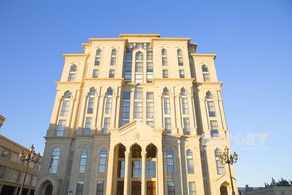 Today the Central Election Commission (CEC) has held a meeting.

Report informs, "The calendar plan main actions and events on preparation and holding of referendum assigned on September 26, 2016 to make amendments to the Constitution of the Republic of Azerbaijan" has been approved in the meeting.

CEC Secretary Arifa Mukhtarova said that the requirements on preparation of the referendum notifications will be approved on August 17. The organizations, intending to hold exit-poll in the voting, can submit their documents to the CEC until September 6. Relevant decision will adopted until August 16. Information on the voter turnout will be provided 5 times on the election day.

In the meeting, the expert group of 9 persons and working group have been established under the CEC to investigate appeals against actions and decisions, violating citizens the right to vote. Expert groups will be involved in the investigation of appeals received by the election commissions.

The final results of the referendum will be announced until October 21.

Notably, Azerbaijani President Ilham Aliyev has signed an order on holding a referendum to make amendments to the Constitution of the Republic of Azerbaijan. According to the order, the referendum will be held on September 26, 2016.