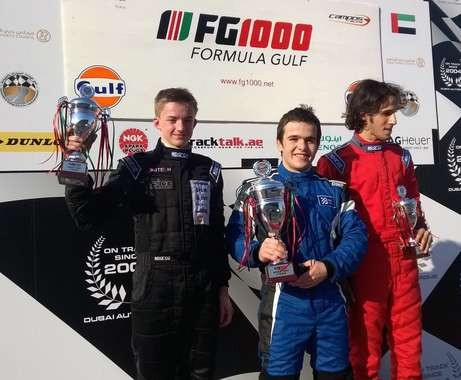 This time Quka, who has recently been chosen as one of only three official ambassadors for the 2016 Formula 1 Grand Prix of Europe in Baku, competed at the Formula Gulf 1000 in Dubai Autodrome, finishing P2 in 9th round and gaining victory in 10th round of Formula Gulf 1000 series.

This stage is the 5th in a row of the FG1000championship, which takes place in the United Arab Emirates since 2011. Each season consists of 14 races and the pilot with the most points wins the season.

In late January, 18-year-old Gulhuseyn participated at 7th and 8th rounds of the Formula Gulf 1000 championship, finishing the race third and first respectively.

The main objective of the competition FG1000 is to provide opportunities for young pilots to gain the necessary experience in order to prepare them for higher-level races.

Gulhuseyn became interested in karting at the age of 8, taking part in the parade of Formula 1 in Istanbul. So far, Abdullayev has participated in many international championships, and is recognized as one of the best racers in Turkey in 2013.

Last year Gulhuseyn took the first place in the RMC DD 2 karting race in Turkey. He also performed at the "Rotax Max Challenge Grand Finals" world karting championships, which was held in New Orleans (USA), and for the first time raised the Azerbaijani flag at such a prestigious international championship.

Quka won the third and fourth rounds of the championship "V1 Challenge Bulgaria 2015", held in the Bulgarian city of Stara Zagora.