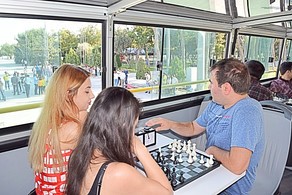 Report was told in the press service of Baku Chess Olympiad, important events are being held to propagate chess. Launch of chess bus in the capital is one of such events.

Baku Chess Olympiad Operating Committee has branded two trip buses of the Ministry of Culture and Tourism and presented to the use of the residents and guests as a chess bus. Mentioned double-decker bus will operate in the capital city's sights free and carry out promotion of chess. All conditions established in the bus to play chess and get information on Baku Chess Olympiad.

Then the first trip started.