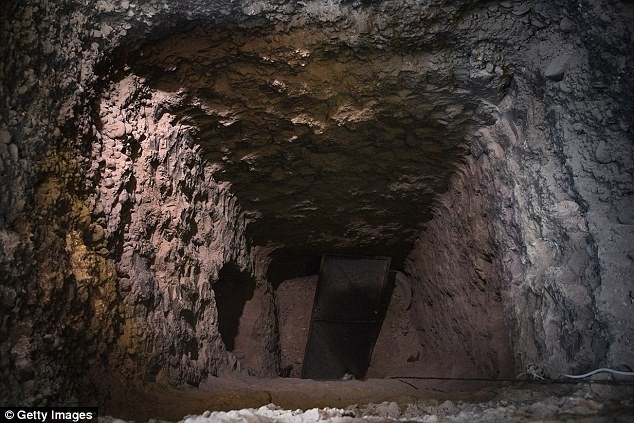 As Iraqi Army troops and their Kurdish allies advance on the city of Mosul the first pictures have emerged of the labyrinth of tunnels ISIS has built in the area. The network may explain the slow progress of the Mosul offensive as ISIS fighters vanish underground to pop up elsewhere. Refugees streaming out of the city say every street has a secret entrance to the catacombs, which are ideal hiding places for machine gunners, grenade throwers and suicide bombers.

Axar.az reportes that Kurdish peshmerga fighters said villagers had been paid $2 a day to build the tunnels, using a jackhammer to dig deep into the bedrock. ISIS appear to be seeking to copy the success of the Vietcong, who outwitted the Americans and their South Vietnamese allies by building a warren of tunnels.

At its peak the Cu Chi tunnel network covered almost 200 miles, from the Cambodian border to the outskirts of Saigon (now Ho Chi Minh City).

The Vietcong resorted to guerrilla warfare when faced with greater firepower, and it seems that ISIS are planning similar tactics.

It is not clear how extensive the network of ISIS tunnels is, but there are fears it might allow ISIS fighters and even their leader, Abu Bakr al-Baghdadi, to wriggle free from the noose which is being slowly closed around Iraq's second city.

It is not clear whether Baghdadi, who is the head of the so-called 'caliphate' in northern Iraq and Syria, will risk death or capture in the fight for Mosul, which is home to more than 1.5 million people, most of them Sunni Muslims. Kurdish defence minister Karim Sinjari said: 'According to unconfirmed reports Abu Bakr was in Mosul three days ago. People saw him visiting fighters and encouraging them. We are not sure he was present, but this is the information.'

Sinjari also said the jihadists, who he referred to as Daesh, contained many former officers from Saddam Hussein's army, who had experience of building tunnels.

He said they had also dug a trench around Mosul which they intended filled with oil and set on fire when the attacking forces gets closer to the city. Another Islamist group, Hamas, have built a network of tunnels under the border between Egypt and the Gaza strip to defy an Israeli blockade.

But Sinjari also said there were reports of insurrections being planned inside Mosul.