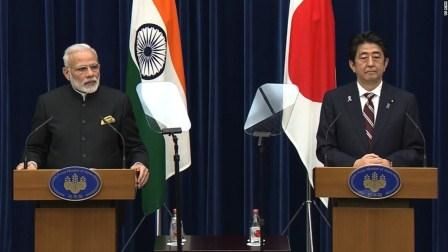 India and Japan signed a landmark civil nuclear energy agreement in Tokyo on Friday that was six years in the making.

The deal -- which was firmed up during the 2015 visit of Abe to India -- will allow Japan to export nuclear power equipment and technology to India.

"Today's signing of the agreement for cooperation in peaceful uses of nuclear energy marks a historic step in our engagement to build a clean energy partnership," Modi said in a joint press conference after the accord was signed. "Our cooperation in this field will help us combat the challenge of climate change. I also acknowledge the special significance that such an agreement has for Japan."

Vikas Swarup, India's Ministry of External Affairs spokesperson, tweeted that it was a landmark deal for a cleaner, greener world. "Without doubt, our destinies are interlinked," he said.

"This agreement is a legal framework which will ensure India will take a responsible action regarding the peaceful use of nuclear energy," Abe said at the press conference.

"It leads to India virtually taking part in the international regime. It matches with our country's stance to promote nonproliferation and a world without nuclear weapons."

The deal has a separate "nullification clause" that will cancel the pact if India conducts a nuclear test - a guarantee for Japan to limit its technology for peaceful and commercial purposes.

There has been political resistance to the deal in Japan, especially after the disaster at the Fukushima Nuclear Power Plant in 2011. The meltdown, the worst nuclear disaster since the 1986 Chernobyl incident, increased safety concerns.

India is also the first country that has not signed the Non-Proliferation Treaty to have such an agreement with Japan, where two atomic bombs were detonated during World War ll. But other nations have signed civil nuclear deals with India - including France, Australia and the United States, which inked a similar deal a decade ago.

The two leaders also underscored the rising importance of the Indo-Pacific region as a key driver for prosperity in the world, according to a joint statement released by India's Ministry of External Affairs.

In addition to the nuclear deal, the two nations have agreed to explore plans to build high-speed rail lines in India based on Japan's bullet train technology, and increase cooperation in engineering and manufacturing.