US asks why Israel gave $50K dual-usage drone to Russia 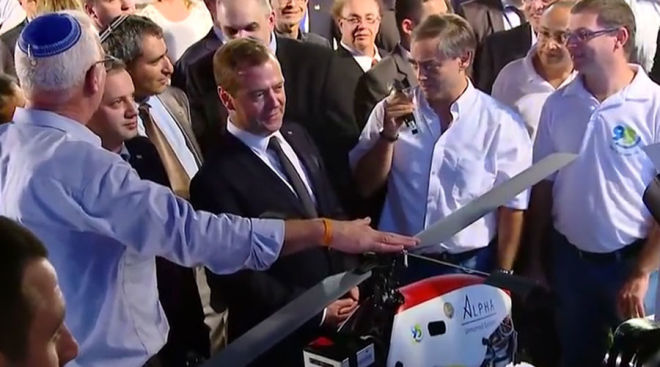 Washington is asking Israel to explain why its agriculture minister gave a drone to Russia’s prime minister that may contain sensitive US technology and information – and apparently wasn’t his to give away in the first place.

It must have seemed like a kind gesture from Israeli Agriculture Minister Uri Ariel at the time, as he offered Prime Minister Dmitry Medvedev a drone in which the Russian leader had expressed interest. After all, footage broadcast on Israeli television showed Medvedev with a wide-eyed grin as he piloted the unmanned aerial vehicle during a visit to Israeli’s Volcani research institute last week.

However, that gesture of goodwill has since been questioned by Washington, as the drone may have contained confidential US technology, Haaretz reported. Such technology is typically used by Israel under license and cannot be transferred to a third party without permission.

In addition, Russia is under US sanctions due to its alleged role in the Ukraine crisis, and is therefore banned from receiving advanced civilian technology that could have dual military and civilian use.

The Israeli defense ministry is expected to provide a full response to the US embassy in coming days.

Israeli media have reported that the drone’s camera was removed and the remote control – worth $13,000 – was never given to Medvedev. Reports suggest officers of the Volcani institute had refused to hand over the remote because it was their only one and the organization could not continue its activities without it.

Nonetheless, some US technology could still be present on the drone.

The research institute has reportedly refused Moscow’s request for the remote control.

Even if the camera had been removed before the handover, Ariel likely isn’t off the hook for his act of generosity, as the $51,900 unmanned aerial vehicle (UAV) was the only drone of its kind in Israel.

Additionally, the drone belonged to the Volcani Institute – not the agriculture ministry – so it wasn’t Ariel’s to give, according to Haaretz. If that wasn’t enough to land Ariel in hot water, the drone’s value exceeds the amount that Israeli officials are allowed to spend on official presents by a factor of more than 60.

Furthermore, even if Russia wasn’t under sanction, equipment that is considered “dual use” must be approved for export in advance by the defense ministry – and the ministry says the “move was never coordinated with us.”

The economy ministry also would have had to coordinate with the defense ministry’s export control department.

However, Ariel has insisted that he didn’t give Medvedev the drone without going through the proper channels, noting in a statement that it had been approved by the “relevant professional officials.”

The statement went on to say that the ministry will soon purchase a new drone to replace it. However, many have been quick to note that the purchase will come at the expense of taxpayers, and the Movement for Quality Government in Israel has called for Ariel to pay for the drone out of his own pocket.

Medvedev was touring the institute as part of a three-day visit to Israel to sign an agreement to help the Russian dairy industry with training, technology, and services provided by Israeli companies and the Volcani Institute – a deal worth as much as $15 billion.