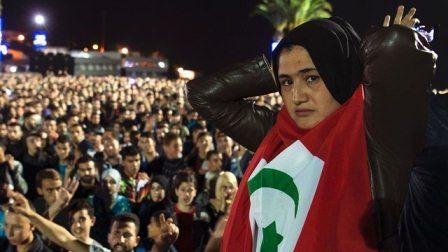 Thousands of people have joined protests against police abuse across Morocco after a fisherman was crushed to death in a garbage truck in an incident some are comparing to the death of a Tunisian vendor in 2010 that sparked the Arab spring uprisings.

According to Moroccan news website Le360.ma and magazine TelQuel, police in the northern town of Hoceima confiscated and destroyed swordfish belonging to a a fisherman, Mouhcine Fikri, because it is not permitted to catch swordfish at this time of the year.

Footage circulating online appears to show Fikri jumping into a garbage truck to retrieve his fish, before being crushed to death by the truck’s compactor.

Fikri’s death on Friday in the ethnically Berber Rif region prompted outrage on social media, and calls for protests in several cities over what is seen as police violence. King Mohammed VI called for a thorough investigation.

Fikri’s funeral in Hoceima drew large crowds on Sunday with the procession led by a dozen drivers in their cars – including taxis – and marchers waving Berber flags.

Thousands of demonstrators – including activists for Berber rights – also gathered in the capital of Rabat, chanting "We are all Mouhcine!" while smaller protests were held in several other Rif towns and in the city of Marrakesh.

The general directorate for national security released a statement on Sunday denying its local officers were involved in Fikri’s death. Authorities have not commented on the circumstances of his death.

Abdelilah Benkirane, the prime minister, released a statement on Saturday offering his condolences over Fikri’s death, but urging members and supporters of his party to refrain from participating in protests.

The Moroccan Human Rights Association condemned the "heinous" incident and recalled another incident in Hoceima, in which five youths died during 2011 protests by the February 20th Movement.

That movement emerged amid the Arab spring uprisings that began in Tunisia when vendor Mohamed Bouazizi set himself on fire after police confiscated his wares. Bouazizi became a symbol of struggle against unemployment, police abuse, corruption and authoritarian governments.

"People are really pissed off, and can’t keep being silent anymore," said Abdellah Lefnatsa, a union leader from a leftwing movement among the more than 1,000 people protesting in front of the parliament in the capital, Rabat. He claimed that students, workers and activists have died because of police violence in recent years.

Rachid Hilali, a technology project manager at the Rabat protest, said, "To me what happened in Al Hoceima should not happen in 2016. This way of killing people by the police, our grandfathers are used to it, but we should not be used to this. We cannot accept this kind of treatment any more."