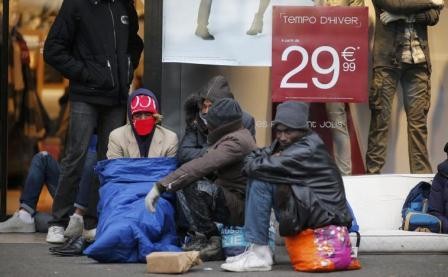 French police started evacuating thousands of migrants on Friday from an illegal camp in northeastern Paris where numbers soared after the closure of the large "Jungle" camp in the port city of Calais last week.

Police moved in at daybreak, Reuters reporters at the scene said. They escorted migrants to dozens of buses from the sprawl of tents and mattresses where numbers living rough surged in recent days to as many as 3,000.

A spokeswoman for the Paris prefecture said the migrants - many from war-ravaged countries such as Afghanistan and Sudan - would be transferred to holding centers in and around the French capital pending the processing of asylum requests.

"The evacuation operation is running smoothly so far," she said, adding that all the migrants would be moved out on Friday. Some 600 police officers were deployed at the location.

The estimated total of around 3,000 at the Paris camp is about twice as many as just a week ago when the bigger camp in Calais was evacuated and demolished.

One Reuters journalist at the location, around a canal and an urban railway bridge at Paris's Stalingrad metro station, said three buses had left by 0700 GMT amid cheering, applause and, in some cases, cries of solidarity with the migrants.

About 80 buses were present.

"We have the means to evacuate up to 4,000 if necessary," Housing Minister Emmanuelle Cosse told France 2 television.

Paris Mayor Anne Hidalgo urged the government earlier this week to clear the camp as a matter of urgency.

Bruno Morel, director of the Emmaus Solidarite charity that has been helping migrants said: "Things are going smoothly so far. It's above all a question right now of reassuring people that there are other options."

In the case of Calais, Interior Minister Bernard Cazeneuve said around 85 percent of migrants were expected to qualify for refugee status and asylum.

France is currently negotiating with London to ensure that Britain takes in child migrants from the now-closed Calais camp, which for years was a magnet for migrants desperate to make it across the narrow Channel sea crossing to Britain.