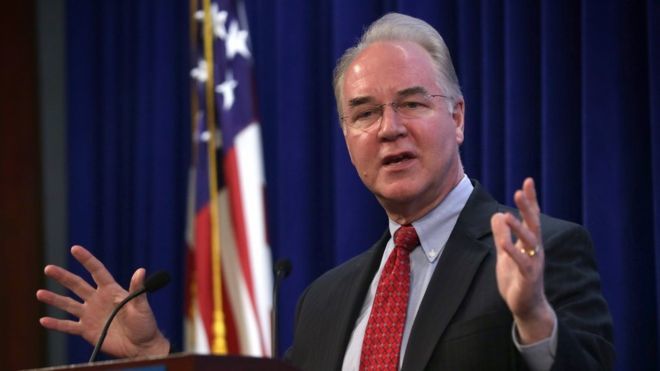 The Georgia congressman and orthopaedic surgeon, 62, chairs the House of Representatives budget committee.

He will play a key role in Republican plans to replace the Affordable Healthcare Act (Obamacare). In his campaign, Mr Trump vowed to repeal and replace the act, considered Mr Obama's flagship measure. However, he has since said he favours keeping certain provisions. Mr Trump said Mr Price was a "tireless problem solver" and "the go-to expert on healthcare policy".

"He is exceptionally qualified to shepherd our commitment to repeal and replace Obamacare and bring affordable and accessible healthcare to every American," Mr Trump said in a statement.

Mr Price said he was looking forward to the opportunity of serving as health secretary on behalf of the American people. He said his aim was to create a new system that worked for patients, families and doctors, adding that it should "protect the well-being of the country while embracing its innovative spirit".

He will be working closely with Seema Verma, who will lead the Centers for Medicare and Medicaid Services, which oversees government health programs and insurance standards. "Together, Chairman Price and Seema Verma are the dream team that will transform our healthcare system," Mr Trump said.

Earlier this month Mr Trump, who has pledged to repeal the healthcare bill, said he would keep some parts of the law such as allowing young adults to be insured on their parents' policies and banning insurers from denying coverage for pre-existing conditions.