Turkish troops are going to withdraw from Bashiqa 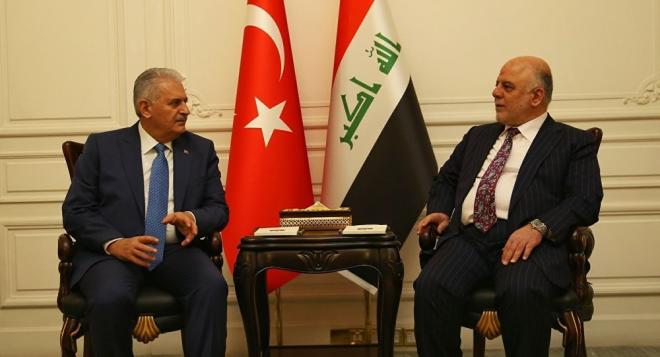 The third Turkey-Iraq High-Level Strategic Cooperation Council meeting was held in Baghdad on Saturday, which declared that both countries would work for their mutual interests as well as for peace and stability in the region.

Axar.az reports ,according to a joint statement, “Both parties agreed to not allow any terrorist organization to carry out any kind of activities from their lands.”

Yildirim is on an official visit to Baghdad to discuss regional issues, including bilateral cooperation against terrorism.

Ankara and Baghdad also agreed to carry out a joint counter terrorism fight and strengthen their security ties.

About the presence of Turkish military in Iraq’s Camp Bashiqa near Mosul city, the statement said the two states agreed it was an Iraqi camp.

Turkey has a longstanding military training mission at Camp Bashiqa, where Turkish soldiers have trained both Peshmerga fighters and local tribal volunteers in combat techniques.

In recent months, the mission’s presence in Mosul in northern Iraq has led to tension between Baghdad and Ankara amid calls by some Iraqi lawmakers for Turkish troops to withdraw.

Baghdad stated that its stance on the camp was unchanged and reiterated its call on Turkey to start its military withdrawal process while Ankara said it respects Iraq’s territorial integrity and national unity.