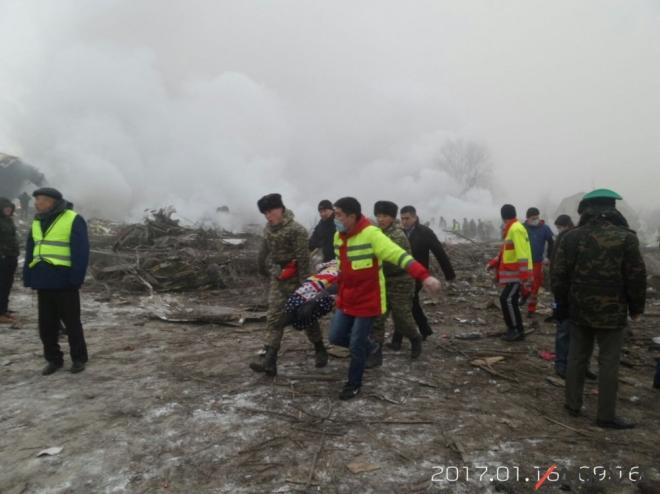 A Turkish Airlines cargo jet crashed near Kyrgyzstan's Manas airport on Monday, killing at least 30 people, most of them residents of village struck by the Boeing 747 as it tried to land in dense fog, Kyrgyz officials said.

According to the airport administration, the plane was supposed to make a stopover at Manas, near the capital city Bishkek, on its way from Hong Kong to Istanbul. It crashed when trying to land in poor visibility at 7:31 local time (0131 GMT).

The doomed plane damaged 15 buildings in the village, said Mukhammed Svarov, head of crisis management center at the emergencies ministry, putting the toll at least 30 people.

Rescue workers have recovered the body of a pilot and 15 villagers, the healthcare ministry said.

Kyrgyzstan’s President Almazbek Atambayev ordered on Monday to thoroughly investigate the deadly crash of a Turkish cargo jet and give assistance to those affected, the presidential press office said.

A Boeing 747 operated by ACT Airlines crashed into homes near Kyrgyzstan’s Manas airport while en route from Hong Kong to Istanbul with a stopover in the Kyrgyz capital, Bishkek. Up to 37 people died both on board and on the ground, according to the national Emergencies Ministry.

"President Almazbek Atambayev has offered condolences to the bereaved relatives and ordered to give all necessary assistance to those affected," the president’s office said in a statement. "The government has been tasked with a thorough investigation into what caused the tragedy." A government source told RIA Novosti the Kyrgyz president was about to sign a decree announcing a national day of mourning on Tuesday. The state KTRK television channel has cancelled all entertainment programs to pay tribute to those who lost their lives.