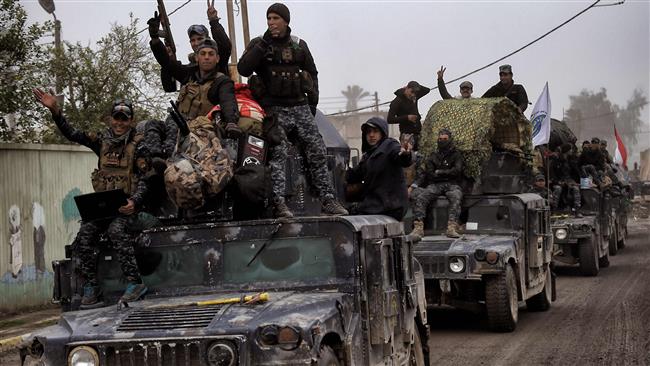 The ISIS Takfiri terrorists are completely under siege by Iraqi forces in the west of Mosul, the terrorists’ last stronghold in the Arab country.

Axar.az reports that Iraqi Defense Ministry spokesman Brigadier General Yahya Rasool said the terrorists were surrounded from all sides. The terrorists must either surrender and face a fair trial or wait for death, the Iraqi official said.

He added that Mosul’s full liberation is "a matter of time." The official said the forces will expel ISIS from the right side of the area.

He said "more than 90 percent" of those who are fighting in the ranks of IS in Mosul are foreigners.

Iraqi army soldiers and allied fighters launched an offensive to retake Mosul in October 2016. The forces took control of eastern Mosul in January and launched the battle in the west on February 19.

According to Alforat News Agency, Iraqi forces managed to recapture several strategic positions from Daesh in the old city of Mosul on Friday.

Iraq’s Federal Police took control of Basha mosque, Adala street and the market of Bab al-Sarai in the old city of Mosul, inflicting heavy losses and casualties on the terrorists.