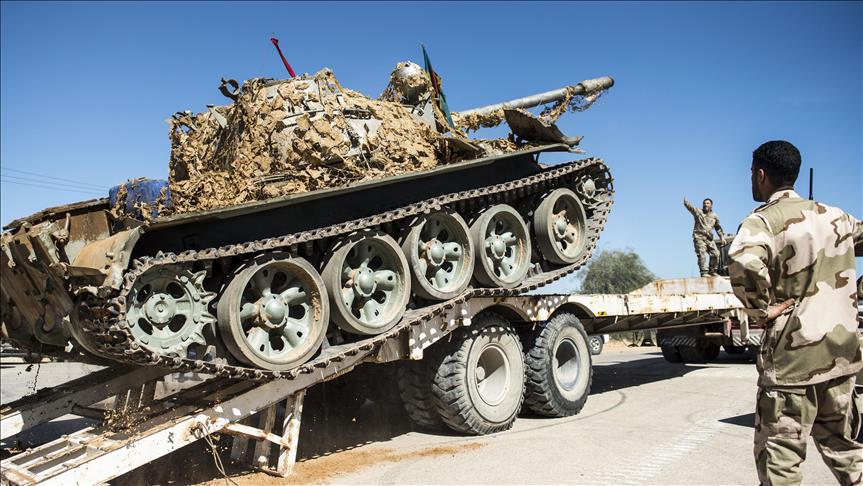 Forces loyal to East Libya-based military commander Khalifa Haftar are facing allegations of war crimes and summary killing after footage appeared to show the execution of opposition fighters in the eastern city of Benghazi.

Mahmoud al-Warfalli appeared in the video while shooting three men in the back of the head with a machine gun as they kneel facing a wall with their hands tied behind their backs.

"This is a heinous crime and is similar to atrocities committed by Daesh organization," the National Committee for Human Rights, a Libyan NGO, said in a statement on Tuesday.

It described the extrajudicial killing of opponents during armed conflicts as a "war crime".

"The policy of summary killing is an aggression and violation of the supremacy of law and justice in Libya," the NGO said.

One video showed LNA fighters cheering and accompanying the body of BRSC commander Jalal Makhzoum, tied to a car hood, as they parade through the city's streets.

The LNA, for its part, vowed to bring those involved in committing atrocities to an investigation committee.

"The actions carried out by LNA members after the liberation of west Benghazi are considered individual acts and do not represent the instructions of the army," the LNA's general command said in a statement.

Last week, Haftar's forces seized control of Ganfouda, one of the last three districts in Benghazi under militia control.

Libya has been locked in a state of violence and turmoil since 2011, when a bloody popular uprising ended with the ouster and death of longtime strongman Muammar Gaddafi.

Since then, the country’s stark political divisions have yielded two rival seats of government -- one in Tobruk and another in capital Tripoli -- each of which boasts its own military capacity and legislative assembly.