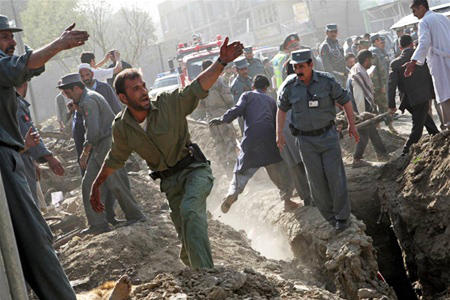 Axar.az reports that NATO Resolute Support Mission Commander Gen. John Nicholson plans to request more troops in Afghanistan to prevent the country from becoming terrorist safe haven, local media reported Sunday.
"We cannot afford to walk away from Afghanistan. This is where the war against terrorism started on 9/11. Failure here would embolden terrorists globally and there would be more members flocking to their banners. We would also see an increased number of migrants in the region coming into Europe," Nicholson, who leads US and international forces in Afghanistan, told The Sunday Times.

The request for more troops, which will be made at a NATO summit in May, is backed by US Defense Secretary James Mattis, according to the news outlet.

Nicholson said the key aim of 12,000 troops he leads in Afghanistan was to defeat the Islamic State (IS) terrorist group (banned in Russia, the United States and many other countries), adding that the Afghan government was controlling only about 75 percent of the country's territory.

NATO-led Resolute Support mission was launched on January 1, 2015, to train and assist the Afghan security forces. NATO leaders decided to extend the presence of the mission in Afghanistan beyond 2016 at the summit in Warsaw.