Businessman was killed during raid 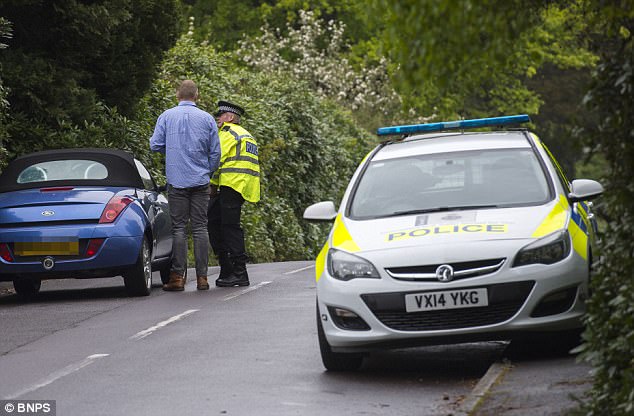 Guy Hedger, 61, was attacked after disturbing intruders at his luxury six-bedroom home in St Ives, Dorset - and the gunman and 'at least one' accomplice are still on the run.

The marketing expert, who worked for LV, Direct Line and was also a director of a business school, was taken to hospital but died of his injuries.

The businessman shared the house with his husband of 12 years, Simon Pierre Hedger-Cooper, 48, who is believed to have witnessed the shooting.

The pair had been in a civil partnership since 2005, first living together in a flat in Brighton before buying the St Ives mansion together five years ago.

Murder squad detectives said that the gunman, who had at least one accomplice, fled following the break-in early yesterday. Both remained on the run last night.

Police say they don't have any reason to believe the intruders were known to the victim.

Detective Chief Inspector Sarah Derbyshire, of MCIT, said: 'We are still trying to establish a motive for the intruders and why this particular address in Castlewood was targeted.

'We believe there was an element of preplanning involved. Therefore we would urgently like to hear from anyone, who may have seen people or vehicles acting suspiciously in the area directly before or during the days leading up to the incident. This may have involved people in the area in general or paying particular attention to the specific house. Any small detail may help us with our investigation.

'Currently we do not believe the offenders were known to the victim, however we continue to investigate all lines of enquiry.

'I am also appealing for anyone who may have seen somebody making off from the area, maybe in a vehicle possibly driving recklessly, to contact Dorset Police as soon as possible.

The couple live in a six-bedroom mansion at the bottom of an exclusive cul-de-sac in St Ives, near Ringwood on the edge of the New Forest.

They bought it for £790,000 in 2012 and it sits at the bottom of a private drive and is set in an third of an acre with grand private garden surrounded by trees.

Mr Hedger, who went to school at the £19,520-a-year Merchant Taylors' School in Northwood, Middlesex. was most recently marketing director for the Avonbourne International Business and Enterprise Academy Trust.

It is based in Bournemouth and runs three colleges and a business school.

He said: 'We were all shocked to hear that our friend and colleague Guy Hedger, LV='s marketing & brand director, died over the weekend in such tragic circumstances.

'An extremely talented marketer, Guy was instrumental in building the LV brand and he will be sorely missed by many. Our heartfelt condolences and sympathy are with his family and loved ones at this incredibly sad time.'