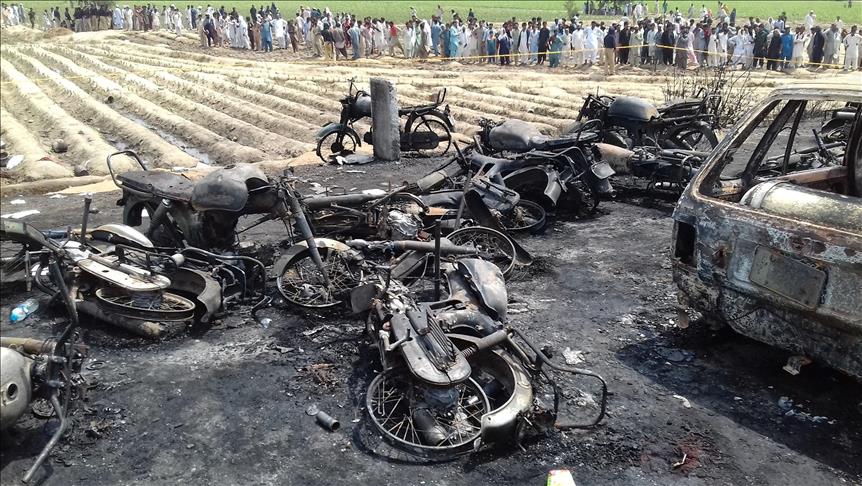 The death toll in Sunday's oil tanker blast in northeastern Pakistan has shot up to 157 as 17 more people succumbed to their injuries at hospitals, officials and local media reported on Monday, the first day of Eid al-Fitr festival marking the end of Ramadan.

Over 100 people were injured when an overturned oil tanker caught fire in Bahawalpur district of northeastern Punjab province.

Saqib Zafar, a district administration official talking to reporters, confirmed the latest figures as the bereaved families remained engaged in burying their loved ones on Eid day.

The federal and all four provincial governments cancelled traditional Eid-related celebrations as a sign of solidarity with the victims’ families.

Prime Minister Nawaz Sharif, who was on a private visit in London, cut short his tour and rushed to the scene on Monday ordering an inquiry into the tragedy that eclipsed the Eid festivities in this South Asian Muslim state.

Doctors, according to local Geo TV, fear rise in death toll as over two dozen people with 60 to 80 percent burn injuries are stated to be in critical condition.

Several injured, according to area people, lost their lives due to unavailability of burns units at the local hospitals as dozens were transported to Multan and state capital Lahore hospitals for better treatment.

Sharif, who is serving for the third term as premier, is credited for the development of communication networks in the country, but is often criticized for not paying that amount of attention towards the development of health and education sectors.

The fire tragedy took place when a big crowd of villagers had gathered to collect fuel from an overturned tanker on the national highway near Ahmedpur Sharqia area in Bahawalpur - located some 430 kilometers (267 miles) from Lahore.

According to initial reports, a cigarette is suspected to have caused the massive blaze that engulfed the people collecting the spilled fuel.

Akhtar Abbas, the city police chief, told reporters that a case had been registered against the oil tanker owner and the driver with no arrests made so far.