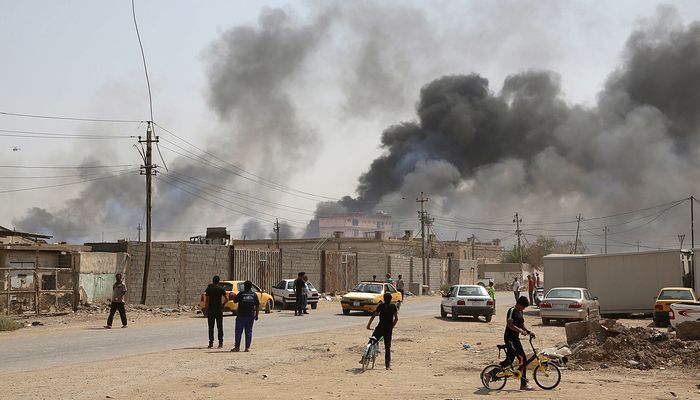 A French delegation has paid a visit to Iraq at a time that the Iraqi forces’ operation against the ISIS Takfiri terrorist group enters its final stages.

Before the meetings, Le Drian said Iraq faced the dual challenge of "a war that is coming to an end and the beginning of the stabilization and reconstruction of the country,” stressing that Paris would continue to take part in the US-led fight purportedly against ISIS.

The US and some its allies have been carrying out airstrikes in Iraq since June 2014 allegedly targeting ISIS. The raids, which have done little to dislodge the terror outfit, have on numerous occasions claimed many civilian lives and inflicted damage on Iraq’ infrastructure.

Speaking at a joint news conference with the French defense minister and his Iraqi counterpart in Baghdad, the top French diplomat said, “We are present in the war and we will be present in the peace.”

A French diplomatic source also said that said Paris would grant a $513 million loan to Iraq before the end of 2017.

For years, the European states, including France, turned a blind eye to the inflow of militants to ISIS-held territory despite warnings that the Takfiri elements’ home countries would face risks upon their return.

The French minister's announcement of support for the fight on Takfiri terrorists comes as Europe is facing its worst security problem in decades following a spate of deadly attacks in a number of countries in the continent.

ISIS unleashed a campaign of death and destruction in Iraq in 2014, seizing Mosul and declaring it as its so-called “capital” in the Arab country.

Iraqi army soldiers and allied fighters have been leading a major campaign to rid the country of the Takfiri elements.

The Iraqi forces fully liberated Mosul last month and launched an offensive to retake the nearby city of Tal Afar.

The Iraqi troops are now on the verge of fully recapturing Tal Afar after driving terrorists out of the city center.

Additionally on Saturday, the French ministers sat down with Barzani in the Kurdish city of Erbil.

Le Drian urged continued dialogue between the KRG and the central government in Baghdad to reach a mutually satisfactory solution over the planned referendum on the independence of Iraq's semi-autonomous Kurdistan region, according to the Kurdish presidency's statement.

Baghdad is opposed to the vote and regional players like Iran and Turkey have also voiced alarm about the planned referendum by Iraqi Kurdish authorities, arguing that it could create further instability in the region.

During the meeting with Abadi, the French delegation also “expressed its commitment to a unified Iraq,” according to the Iraqi premier’s statement.