"Baku is a new global space" 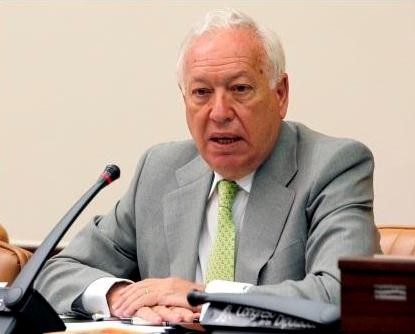 He made the remarks at the opening ceremony of 7th UNAOC Global Forum in Baku on April 26, local media reports.

The Spanish FM thanked the Azerbaijani state for its support to organizing the forum.

He said that the Silk Road was the internet of the Middle Ages while Baku was one of the important centers.
“This forum brings all together and calls on us to take preventive measures against the existing problems,” said Spain’s foreign minister.

According to him, the Alliance, as an UN tool, will contribute to the elimination of contradictions among different societies, thus it is a very important platform.

The FM went on to say that the diversity of civilizations is an undeniable force in making progress and a principled position is needed in this issue.

Margallo said that it’s necessary to create an inter-civilization platform to combat terrorism.

He said cultural events are of importance in terms of preventing conflicts. “Spain regularly holds numerous events in this regard. However, we have a long way to go.”

Spain’s foreign minister noted that the threat of extremism has increased in recent years.

“We definitely need to fight extremism, it is our moral duty. This is an important issue for Spain. Thus, in 2015, Spain held an event at the level of foreign ministers, which ended with the adoption of the Madrid Declaration,” he added.

Margallo proposed to create a committee of tolerance.

“Youth who have fallen victim to terrorism need to be educated about peace and tolerance. For this purpose, a private platform should be created, social networks and video games used,” said the foreign minister. “In this regard, the media too should play a role in promoting religions and cultures. Our preaching channels need direct access to victims.”

The FM invited the participants of the forum to attend the upcoming meeting of religious leaders in Spain.
He called on experts to give their opinions and proposals regarding issues of peace-building.
Peace cannot be ensured without women’s active participation, the foreign minister underlined.

Margallo also proposed to hold another meeting of youth next year for the discussion of issues of multiculturalism and peace. “What’s important is that we need to be able to coexist despite differences,” he stressed.