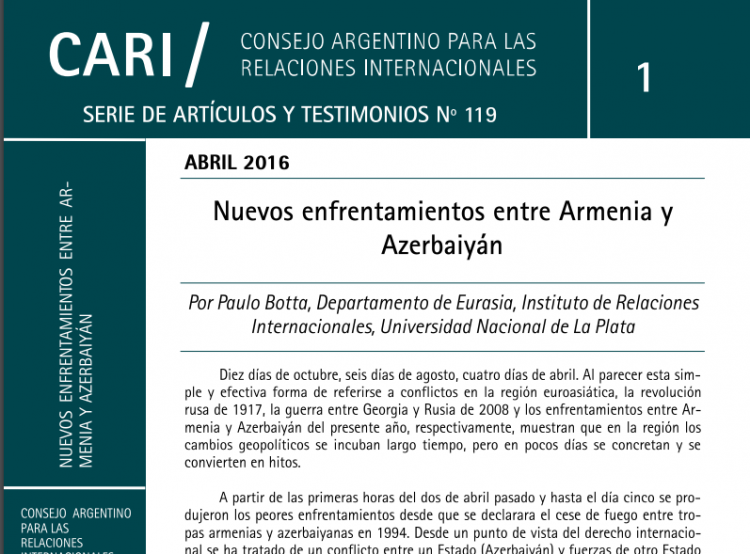 Argentine Council for International Relations (CARI), one of the main brain institutes in Argentina, has published on its website an article titled “New confrontations between Armenia and Azerbaijan”.

Written by Prof. Paulo Botta, the coordinator of the Azerbaijan studies department at the Institute of International Relations of Argentina’s National University of La Plata, the article talks about the history of the Armenian-Azerbaijani conflict, its consequences in the region, roles of regional countries and other international powers in the settlement of the conflict, negotiations in this direction as well as the latest escalation on the contact line of troops.


The article also notes the importance of Azerbaijan’s territorial integrity, the occupied territories being part of Azerbaijan. It mentions that international organizations including the UN Security Council and the General Assembly have confirmed these facts in their documents and resolutions.

The author even goes on to mention the baseless claims of the Armenian side, and its efforts to inhibit the peace talks and continue the occupation, as a result of which Armenia is secluded from the region.

The article adds that the Armenians also occupied some other Azerbaijani territories which they had never claimed because they need those territories as a direct corridor between Armenia and Azerbaijan’s occupied Nagorno-Karabakh region.

The article says the “Nagorno-Karabakh Republic” is not recognized as an independent state by any country, not even by Armenia itself. The population of Nagorno-Karabakh uses Armenian dram, the Armenian national currency, and Armenian passports.

Thereafter, touching upon the inefficiency of the OSCE Minsk Group, the author also analyzes the positions and efforts of countries such as Russia, the US, Iran, Georgia and Turkey for the settlement of this conflict.


The article also underlines that Armenia did not receive expected support from the Eurasian Economic Union and the Collective Security Treaty Organization.