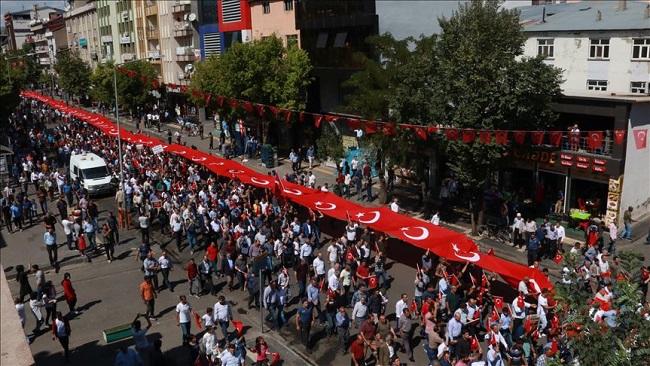 People from all walks of life unite against terror group responsible for deaths of nearly 40,000 people in country.

Axar.az reports citing AA that thousands of people took to the streets across Turkey on Saturday to protest against the PKK terror group which is responsible for the deaths of nearly 40,000 people in the country.

The mass protests were triggered by an ongoing demonstration by 24 mothers in the eastern province of Diyarbakir against the abduction of their children by the PKK.

Some 51 non-governmental organizations (NGOs), the local governor and mayor, and the ruling Justice and Development (AK) Party lawmakers attended the protest in the eastern province of Van.

People carrying the Turkish flag chanted slogans against the PKK. "Turks, Kurds are brothers, separatists are rats," some said.

Public officials, lawmakers and NGO representatives also came together in the southeastern province of Hakkari.

"I hope that the fight against terrorism will continue until there is not a single terrorist on this land. Those who point guns to these innocent people will be punished,” said Governor Idris Akbiyik.

Similar protests were held in the eastern Mus, Bitlis and Siirt provinces.

"We will no longer send our children to the mountains, but to the school. They will be lawyers, engineers, scientists, and we will not play into the hands of the organization. We want to go to Cudi for a picnic. We want the tourists to come to the waterfall in Gabar," said Mehmet Nuri Genc, an opinion leader in Sirnak's Idil district.