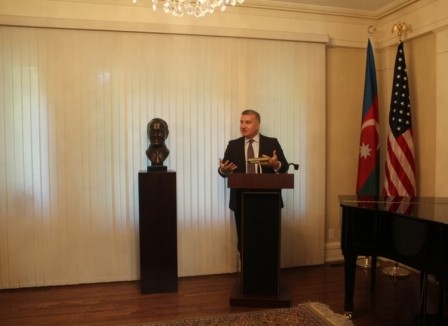 Azerbaijani Embassy in the U.S. hosted the meeting with the members of Washington Intergovernmental Professional Group, LLC.

The embassy told APA that President of the Organization Nelson Garcia delivered a speech and said the main goal of the organization is the establishment of relations between employees of US government agencies, private sector and members of the foreign diplomatic missions in Washington.

Then Azerbaijan's Ambassador to the U.S. Elin Suleymanov underlined successful cooperation between the two countries and relations established basing on security, energy, economic and political reforms.

He noted that Azerbaijan was one of the first countries supporting the United States in the fight against terrorism and said the country is interested in establishing peace in Afghanistan and world’s hot spots. The ambassador stressed that Azerbaijan has built a secular and progressive state with mostly Muslim population, against the background of increasing radicalism and extremism in the world and said there is no ethnic, religious and gender discrimination against anyone in the country. He added that Azerbaijan’s experience may be useful in solving many challenges faced by the international community.

The ambassador, touching upon the Armenian-Azerbaijani Nagorno-Karabakh conflict, noted that Armenia occupied 20 percent of Azerbaijani territory grossly violating the international law. Though the UN Security Council adopted 4 resolutions regarding the conflict, Armenia still continues the occupation of the Azerbaijani territories. The ambassador said that Armenia’s future will depend on a fair solution to the conflict within the international law and its building normal relations with neighboring countries. He also said that Azerbaijan highly appreciates the positive role the U.S played in the settlement of the conflict as an OSCE Minsk Group co-chairing country.

Saying that Azerbaijan has done important work for diversification of economy, the ambassador mentioned that one of the steps taken in this regard is the construction of the modern Silk Road. Mentioning that our country created a working group with neighboring countries for construction of the road, the diplomat stressed that transport of goods from China to Europe through the modern Silk Road will take just 14 days.

In the end, the ambassador answered questions of the event participants.