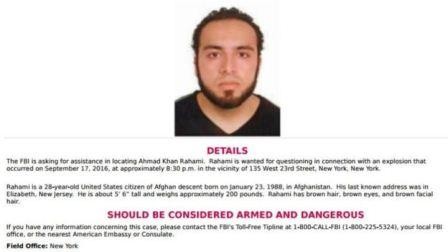 New York officials have identified a suspect wanted for questioning over Saturday's blast in the Chelsea area in which 29 people were injured.

The man has been named as Ahmad Khan Rahami, 28, a naturalised US citizen who was born in Afghanistan.
The New York Police Department (NYPD) also released a photograph.

Early on Monday, a backpack containing up to five devices exploded in Elizabeth, New Jersey, when a bomb disposal robot tried to deactivate it.

Investigators have warned the suspect, whose last known address was in Elizabeth, should be considered "armed and dangerous".

"Anyone who sees this individual or knows anything about him or his whereabouts needs to call it in right away," New York Mayor Bill de Blasio said on CNN.

Both the bomb that went off in New York on Saturday and a device found nearby were shrapnel-filled pressure cookers, according to US media.

The backpack in New Jersey was found near the railway station in Elizabeth.
It was picked out of a bin by two men on Sunday evening, who thought the bag could contain something of value.

"That was not a controlled explosion," said Elizabeth Mayor Christian Bollwage, adding that the blast, in the early hours of Monday morning, happened as a robot examining a device cut a wire.

These are the attacks in the US over the weekend that caused security alerts:

A pipe bomb exploded on the route of a charity race in New Jersey on Saturday, forcing the event to be cancelled but causing no injuries

Also on Saturday, at least eight people were wounded in a stabbing attack at a shopping mall in the US state of Minnesota

At least 29 people were injured in an "intentional" explosion in the Chelsea area of Manhattan at around 21:00 (01:00 GMT on Sunday)

One device found in Elizabeth exploded early on Monday as a bomb disposal robot tried to deactivate it.