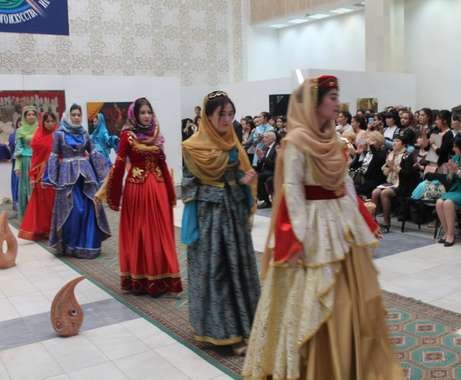 Academy of Arts of Uzbekistan hosted a fashion show of young designers in the country's capital Tashkent.

Employees of the Azerbaijani embassy in Uzbekistan and the Heydar Aliyev Culture Center functioning under the embassy, representatives of Uzbekistan Academy of Arts, teachers and students of Uzbekistan's Kamaleddin Behzad National Institute of Arts, prominent art figures, and media were in presence.

During the show, participants spoke about rich cultural and historic heritage of Karabakh region.

Accompanied by the Azerbaijani national song Sari Gelin, top models demonstrated the national costumes of the Karabakh region, dating back to the 17th and 19th centuries. A genuinely unique and inspirational collection was presented by Baku Fashion house.

During the show, the participants spoke about rich cultural-historic heritage of Karabakh region.

National costumes of Azerbaijanis are unique for their pretty look. Some twelve stages can be identified in the formation of national costume. Each stage saw further development and improvement, corresponding to changing tastes and living conditions.

The women dresses have elegant silhouettes and are cut to emphasizing flexible waist of Azerbaijani beauties. They are decorated with intricate embroidery and beautiful golden band.