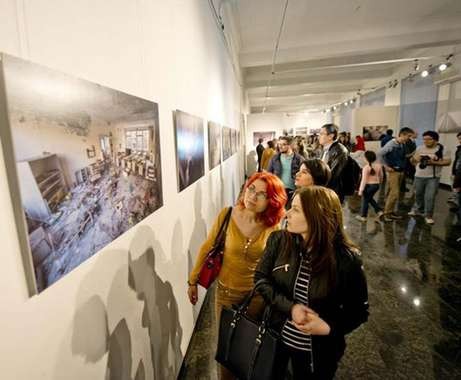 Photographer Orkhan Azim held an exhibition devoted to the 30th anniversary of Chernobyl disaster on April 27.

The event began with a minute of silence in tribute to the victims of Chernobyl disaster.

The photo exhibition was attended by representatives of the Ukrainian embassy in Azerbaijan.

Addressing the event, national artist Aghali Ibrahimov said that the exhibition will arouse great interest of the public.

"Recent global challenges increase the value of this exhibition. Photos by Orkhan Azim are works of art.

Neither the music nor the film can affect people like photos. This is a really good job", said Ibrahimov.

Editor-in-Chief of Report News Agency, Murad Aliyev for his part, said that the Chernobyl accident was great tragedy for all countries of the former Soviet Union.

"Many Azerbaijanis provided assistance to eliminate the consequences. Organization of such an exhibition will commemorate their memory. Taking into account all these cases, Report News Agency sent its photographer Orkhan Azim, to the area. He decently coped with this task", said Aliyev.

In his speech, Chairman of the Union of Chernobyl Disabled Persons Mirhasan Hasanov spoke about Azerbaijanis' role in elimination of Chernobyl problem, health state of those affected by this tragedy and about their children. He said that they participated in the elimination of the accident, which occurred in the fourth block, 'So far, more than 3,500 people have been killed. A total of 600,000 citizens of the former Soviet Union took part in the elimination of the Chernobyl accident, of which 7,000 were Azerbaijanis.

The Chernobyl disaster was a catastrophic nuclear accident that occurred on 26 April 1986 at the Chernobyl Nuclear Power Plant in the city of Pripyat, then located in the Ukrainian Soviet Socialist Republic of the Soviet Union (USSR). An explosion and fire released large quantities of radioactive particles into the atmosphere, which spread over much of the western USSR and Europe.

The Chernobyl disaster was the worst nuclear power plant accident in history in terms of cost and casualties. It is one of only two classified as a level 7 event (the maximum classification) on the International Nuclear Event Scale, the other being the Fukushima Daiichi nuclear disaster in 2011.