Leyla Aliyeva in the film presentation 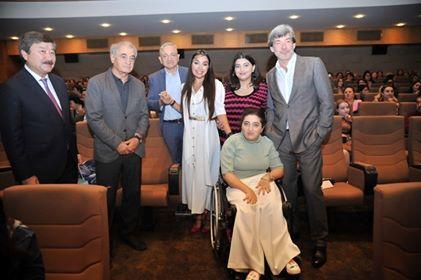 On October 15, the Nizami Cinema Center hosted a presentation of a documentary entitled "One Life, One Love", dedicated to the memory of the famous Russian poet, Honored Artist, laureate of the State Prize Andrei Dementiev.

Well-known journalist, screenwriter and director Oleg Schommer spoke before the film's presentation about the life and work of the poet. The director said that he has always had a great impression and knowledge of Azerbaijan and that he has been to our country many times. He said that for the last time Andrei Dementiev participated in the event dedicated to the 200th anniversary of the famous poet Mikhail Lermontov in Azerbaijan five years ago.

“At the event, Andrei Dementiyev will be presented with the poems of a young poet. A poet who reads poems says he really enjoys them. He says that the author of the poems will have great creativity in the future. Thus, the first book of poems by Leyla Aliyeva, the author of those poems, is being published, ”Schommer said.

He said that new documentaries will be made as part of the cooperation with the Heydar Aliyev Foundation. He said that each of the screenings will be presented separately. Schommer said Azerbaijan always pays attention to the works of great poets.

Then the guests watched the movie.