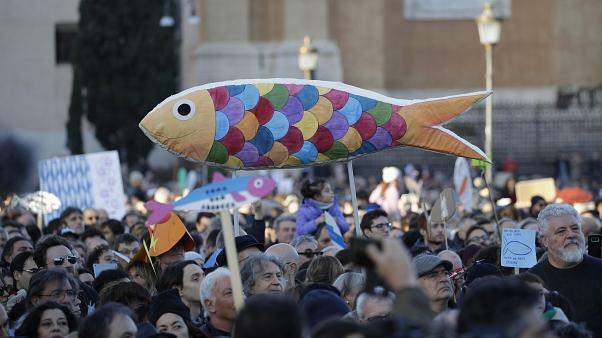 Tens of thousands of people joined a demonstration in central Rome on Saturday organized by a grassroots movement known as “the sardines”, launched only a month ago to protest against far-right leader Matteo Salvini.

The sardines began in the city of Bologna in November when Mattia Santori, 32, and three friends invited people to protest against Salvini’s League, whose popularity is high ahead of an election in the northern Emilia-Romagna region.

Salvini hopes to lead a resurgent right to its first poll victory in the wealthy region on Jan. 26. He says that if the left loses power there, it should also quit the coalition government in Rome and open the way for a national ballot.

Students, pensioners and families with children filled Rome’s Piazza San Giovanni on a sunny afternoon, some holding pictures of sardines on cardboard and chanting a popular resistance song.

“I’m here because I’m against Salvini and I’m against the right and I want to see how many people feel like me,” said Flavia Simula, a 68-year old retired biologist.

Since their maiden protest in Bologna gathered an estimated 15,000 people, the popularity of the “sardines” has spread.