Ilham Aliyev: "Azerbaijan has suffered from this" 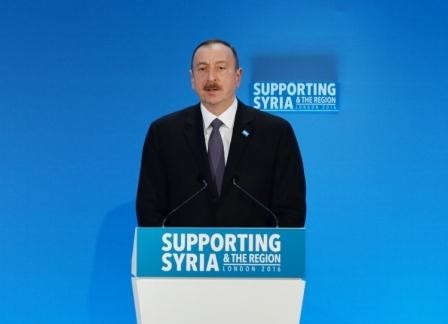 We are very sorry for the situation of Syrian refugees. In the years of independence - in the early 1990s, when the neighbor Armenia unleashed aggression against Azerbaijan, Azerbaijan suffered from humanitarian disaster and crisis. As a result of Armenian aggression 20 per cent of the internationally recognized territory of Azerbaijan has been occupied. We were subjected to ethnic cleansing. More than one million Azerbaijanis became refugees and internally displaced persons.

President of the Republic of Azerbaijan Ilham Aliyev said during a speech in the session on the theme of "Education", held in the framework of "Supporting Syria and the Region Conference" on February 4, in London.

"It really has been a humanitarian disaster. At that time, our country was very young and poor. One million of the eight million people - the highest rate in the number of refugees per capita - were at that time jobless and homeless had been deprived of opportunities in life. We are grateful to the international humanitarian organizations, in particular, the UN High Commissioner for Refugees that support us in a difficult moment of our history", said the Head of State.

According to President Ilham Aliyev, today Azerbaijan is a donor country itself, providing financial assistance, including the Syrian refugees: "In 1994, Azerbaijan and Armenia was established ceasefire. Unfortunately, since that time at the negotiating table has not been reached serious progress on the settlement of the conflict. Despite the fact that the UN Security Council adopted four resolutions demanding the immediate and unconditional withdrawal of Armenian armed forces from the occupied territories of Azerbaijan, for more than 20 years that Armenia ignores these resolutions".

"However, the achievement of the ceasefire agreement in 1994 provided us with the opportunity to develop. Since then, the development of Azerbaijan has been rapid. We have provided 250 thousand refugees with the necessary living conditions. The literacy rate in our country, including refugees, is 100 percent. Ten years ago, about 70 per cent of refugees lived in poverty. And now the poverty rate among refugees is only 12 percent. In general, unemployment and poverty make up 5 percent. Why do I bring to your attention these figures?! Because a country can grow and cope with great difficulties, only in conditions of peace and stability. Today we have heard a lot of speeches and calls for help. Azerbaijan is among the countries that have already contributed and will contribute to human development in Syria. But most importantly is the peace, the cease-fire, the search for a political solution. Only after that will be opened new jobs, education will be at the desired level, and people will begin to believe in their future. We, as a country affected by major economic and social difficulties, know the way to achieve this. We can share our experience in the creation of jobs. Over the past ten years in Azerbaijan created 1,5 million jobs. We can also share our experience in the field of education. In our country has built more than 3 thousand schools and, as I said, will reach 100 per cent literacy rate. We can also share experiences on the management of the humanitarian crisis and will do it. But the main thing is peace. Therefore, as soon as possible to find a political solution to the Syrian crisis is the number one issue on our agenda. I am sure that today’s discussions will play an important role in the search of a political solution. Azerbaijan, as a country having financial and economic capacity, could achieve this not in terms of peace, but only a ceasefire", President Aliyev said.