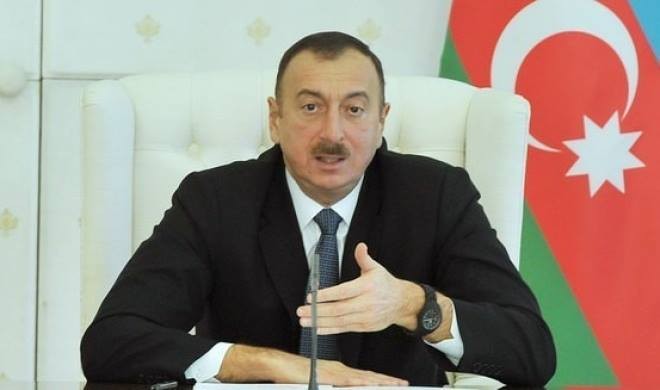 In an answer to the question of the representative of the Ministry of Foreign Affairs of Armenia, in connection with the criticizing Armenia by the Azerbaijani side for a number of problems, including water pollution in the Araz river, Azerbaijani President Ilham Aliyev noted that these introduced ideas are absolutely wrong.

"Armenia is criticized by the Council of Europe, by European Parliament for very severe violation of human right, for falsification presidential and parliamentary elections, and many other things which your government committed".

The Head of the State noted that Azerbaijan blames Armenia only for occupation: "We are blaming Armenia for occupation, and not only us, but Security Council of United Nations – the highest international body – adopted four resolutions demanding immediately and unconditionally withdrawal of Armenian forces from occupied territories of Azerbaijan. We are blaming Armenian government, not Armenian people, for Genocide in Khojaly where innocent civilians were killed by Armenian gangs only because they are Azerbaijanis. And this genocide is recognized by more than 10 countries. We are blaming Armenia for suffering of million refuges and IDPs, who become refugees on their own lands, 40 thousand from Nagorno Karabakh, 750 thousand from other occupied territories of Azerbaijan and 200 thousands Azerbaijanis who expelled and ethnically cleansed from Armenia. These all of are results of Armenian occupation, result of your policy toward neighboring country. This occupation must be stopped. In order to achieve peace in the region - first condition is stop occupation of Azerbaijani lands”.