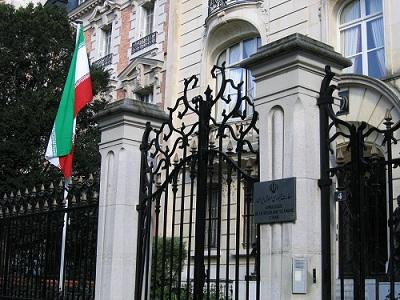 A number of unknown assailants attacked Iran’s embassy building in Athens, only two days after the Islamic Republic’s diplomatic mission in Paris came under attack.

The attack took place on Monday morning, 6 a.m. local time, during which the assailants used bottles of paints to express their anger, media reports said on September 17.

They reported that the attack by 10 anarchists on motor-bikes occurred in the suburb of Psychiko. The assailants disappeared after the attack and no arrests have been made so far.

In a Facebook post, a spokesman for the group said that the attack was in response to Iran’s “brutal repression” of the Kurds.

On September 15, the Iranian embassy building in Paris was also attacked this time by members of the Komala Party of Iranian Kurdistan.

Komala Party of Iranian Kurdistan is an armed communist ethnic party of Kurds in Iran, exiled in northern Iraq.

In a statement last week, the IRGC confirmed that it had launched a missile attack a day earlier against a center in northern Iraq, which was used for training of “anti-Iran terrorists and hosted a meeting of terrorist leaders.”

The IRGC said it had destroyed "the center of conspiracy" against Iran’s national security in the operation.