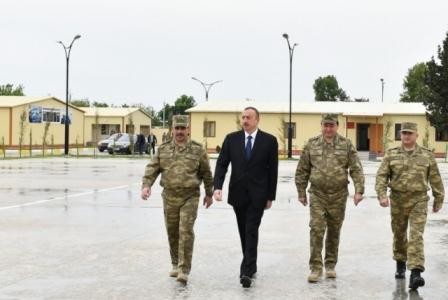 The international community is fully aware of the conflict. We managed to prove to the world over the years that we are the injured party of the conflict. Armenia is an occupying state that committed genocide against the Azerbaijani people, occupied our lands and continues this occupation.


President of the Republic of Azerbaijan Ilham Aliyev made the remarks during the meeting with the personnel of a military unit in Terter district.


The head of state said the OSCE Minsk Group co-chairs have repeatedly said in recent years that the "status-quo" is unacceptable and must be changed. “What does it mean? It means that the occupation must be ended. It is a direct message addressed to Armenia. Therefore, as Azerbaijan is gaining more support in the world, Armenians intermittently resort to armed provocations to disrupt the negotiations and continue their aggressive policy. We have recently witnessed it. They attacked our positions in the summer of 2014. Our army gave a decent response to them. After some progress in the negotiations in November, 2014 they conducted large-scale exercises in Aghdam which involved 47,000 soldiers. This was a provocative step. Azerbaijan demonstrated remarkable patience for a few days. However, then Armenia's two military helicopters attacked our positions. The Azerbaijani army shot one of them down. Taking advantage of this, Armenia has accused us and created stagnation in the negotiation process. They accused Azerbaijan of ceasefire violation under the pretext of downed helicopter. It was aimed at disrupting the negotiations and continuing their aggressive policy,” said president.


The head of state noted that there has been some progress in the negotiation process since the beginning of this year. “We know that co-chairing countries are putting serious pressure on Armenia. They do not announce it openly but they always try to maintain the balance. The truth is, the side inhibiting the conflict’s peaceful settlement today is Armenia. Having seen this, they decided to resort to new provocations, which took place in early April. Once again they committed an armed provocation, attacking our positions. The Azerbaijani Army, in a highly skilful and professional manner, carried out a counter offensive operation, pushing back the enemy. So our positions along the contact line were fortified further. At the request of the Armenian side, we then agreed to restore the ceasefire on 5 April. We do not want war. Rather we want the problem solved peacefully. But there is no point in holding negotiations for show-off. By this means, on 5 April the agreement was reached as to restoring the ceasefire regime. Regrettably, Armenia is still insincere and has not stopped violating the ceasefire for a single day since 5 April.


During the first few days they tried to attack our positions in order to drive us out of the positions we had gained control of. When they saw that it was not possible and the Azerbaijani soldier stands firm in his motherland, they began armed provocations against civilians. Our villages came under fire. Civilians lost their lives and got wounded. More than 500 houses were damaged and more than 100 houses were completely destroyed or burned. That’s the ugly face of Armenian fascism. They had done similar acts during the first Karabakh War, carrying out the Khojaly massacre against the Azerbaijani people. And today, after having found themselves powerless on the battlefield, they target civilians,” said the head of state.