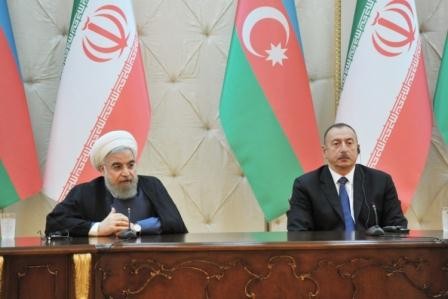 "Relations between the two countries have been developing rapidly in the last three years, with mutual visits and meetings in different formats and a number of steps forward,” Iranian President Hassan Rouhani, who is on an official visit to Azerbaijan, said at the press conference following his meeting with Azerbaijani President Ilham Aliyev.


The Iranian president noted that significant work must be done in the banking sector too.


Rouhani said that Caspian-related issues were discussed at the meeting with President Ilham Aliyev.


"The Caspian littoral countries should become an area of ​​peace and stability. To overcome some of the problems related to the Caspian Sea, some quick works have to be done. We think joint work is necessary in the oil, gas and other areas. Ecosystem is too important to us. We have to focus on preventing pollution of the Caspian Sea. In this regard, we encourage the creation of a Caspian center in Azerbaijan, “ Rouhani said.