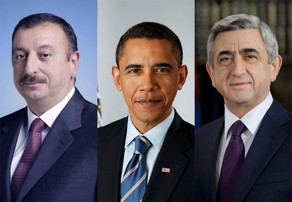 President Obama will host and convene the Fourth Nuclear Security Summit beginning on March 31 at the Washington Convention Center.

Among the scheduled attendees are two leaders who rarely get together because their nations have been at loggerheads for decades.

While it is important for world leaders to agree on how best to keep nuclear weapons out of the hands of rogue nations or terrorist groups, the presence of Presidents Ilham Aliyev of Azerbaijan and Serzh Sargsyan of Armenia offers a rare yet historic moment for President Obama to take the lead in solving one of the most troublesome conflicts left from the break-up off the Soviet Empire. Regional experts have taken to calling a seemingly intractable dispute between the two nations over ownership of the territory of Nagorno-Karabakh the “frozen conflict.” In 1991, full-scale war broke out between Armenia and Azerbaijan and despite a cease-fire in 1994, border skirmishes and fighting continues to this day, over a million people have been displaced and Armenian forces occupy close to 20 percent of Azerbaijan’s territory.