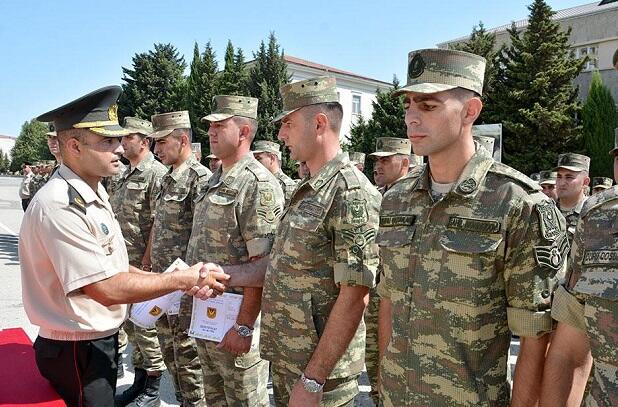 On August 19, the next graduation ceremony of the Warrant officers training course was held at the Training and Educational Center of the Azerbaijan Army.

Axar.az reports that first, the memory of the national leader of the Azerbaijani people Heydar Aliyev, and Shehids (Martyrs), who sacrificed their lives for the sovereignty and territorial integrity of the Motherland, were honored with observing a minute of silence. The National Anthem of the Republic of Azerbaijan accompanied by a military orchestra was performed.

At the graduation ceremony, speakers congratulated the graduates on the completion of the Warrant officers training course and wished them vigilance in defending the Motherland and success in their further military service.

Speaking on behalf of the graduates, warrant officer Vusal Mammadiyazade promised that the knowledge and skills acquired during the course will be successfully applied in their military service, as well as worthily fulfill the duties assigned to them.
The graduates, who successfully completed the course, were presented with certificates and "warrant officer" military ranks. Then servicemen marched in front of the podium.
In the end, a photo was taken.