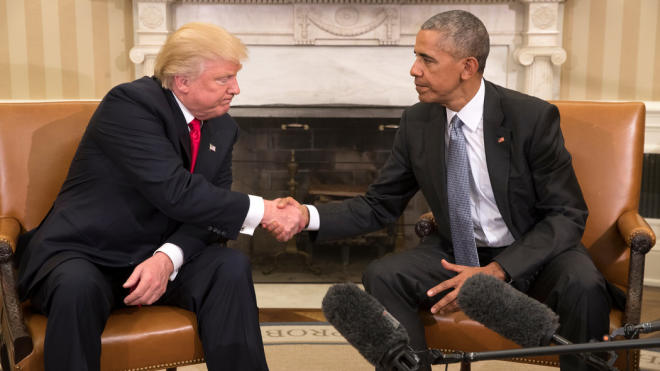 U.S. President Donald Trump says that Obama likes him. And that he likes him back.

Trump said as much in an interview with Fox News personality Bill O’Reilly that was taped on Friday.

O’Reilly told the president that it was “fascinating” to watch how much he and Obama appeared to enjoy each other’s company at Trump’s presidential inauguration.

“You guys seemed to get along, would that be accurate?” O’Reilly asked.

“It’s a very strange phenomenon. We get along. I don’t know if he’ll admit this, but he likes me. I like him,” Trump responded.

His comment came after what he called a “rough” election campaign in which the two men had said “vicious” things to each other.

At one point during the campaign, Obama said that Trump proved he wasn’t qualified to be president “every time he speaks.”

Trump, meanwhile, accused Obama of being the “founder of ISIS.”

“We said horrible things about each other,” Trump told O’Reilly.“And then we hop into the car and we drive down Pennsylvania Avenue together, we don’t even talk about it. Politics is amazing.”

But Obama wasn’t the sole subject that O’Reilly and Trump covered in their interview.

They also talked about Russian President Vladimir Putin. O’Reilly called Putin a “killer” at one point.

“What do you think? Our country’s so innocent?” Trump responded.

The U.S. president then explained the respect he has for Putin.

“I respect a lot people but that doesn’t mean I’m going to get along with him,” he said.

“He’s a leader of his country. I say it’s better to get along with Russia than not. And if Russia helps us in the fight against ISIS, which is a major fight, and Islamic terrorism all over the world – that’s a good thing.”