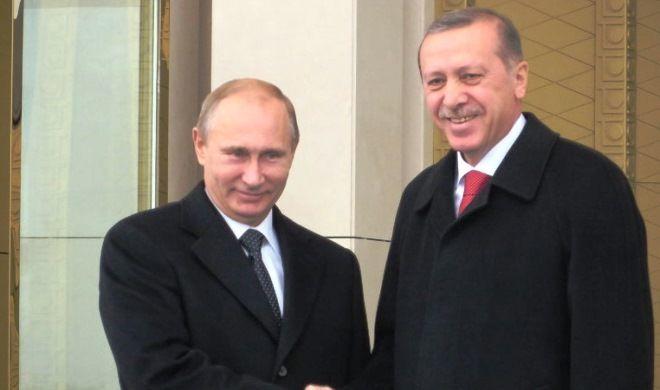 A host of economic and security-related issues will be tackled by today’s high-level meeting between Ankara and Moscow, Turkish President Recep Tayyip Erdogan said Friday in Russia.

"I believe the steps we will take in many areas like the economy, trade, military, and the defense industry will be the main topics of today's High-Level Cooperation Council meeting," Erdogan told reporters ahead of meeting one-on-one with his Russian counterpart Vladimir Putin at the Kremlin.

"We are very glad to rapidly restore relations” with Turkey, Putin said, alluding to a temporary rift over the downing of a Russian fighter jet in November 2015.

He said it had been a "very long" time since Russia and Turkey had such a meeting.

Putin also said the two countries are "actively" working to solve crises in the world, including Syria, and establish ties of trust between their militaries.

“No one expected there to be such close cooperation between the Russian Turkish military and intelligence services,” he added.

After meeting Putin, Erdogan will lead a group of Turkish Cabinet ministers to attend the sixth High-Level Cooperation Council between Russia and Turkey.

The two sides are expected to agree a series of arrangements on economic, cultural and tourism cooperation, which are due to be revealed in a news conference late Friday.

After the meetings, the Turkish delegation will be hosted at a banquet.

Before returning to Turkey in the evening, Erdogan will lay a wreath at the Tomb of the Unknown Soldier near the Kremlin wall.

The last meeting between Erdogan and Putin was held in August after Turkey and Russia patched up the fallout from the downing of a Russian jet over the Turkish-Syrian border.

Since the summer, Russia has relaxed the sanctions imposed on Turkey in response to the jet incident and the countries have worked together to bring a cease-fire and political solution to Syria.

Relations were tested in December when the Russian ambassador in Ankara, Andrey Karlov, was killed in the capital. However, Putin declared the shooting a “provocation” designed to undermine Turkey-Russia relations.