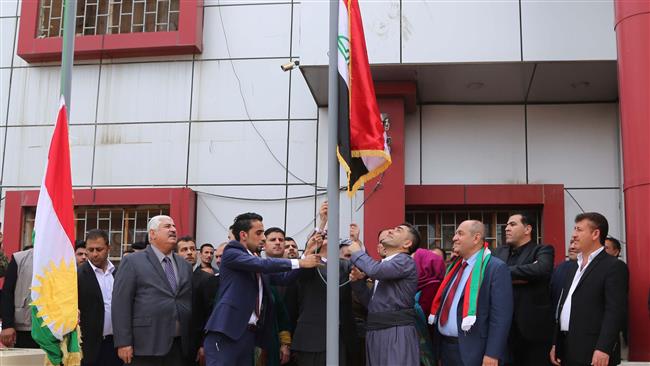 INA issued a statement on Monday after Iraqi Prime Minister Haider al-Abadi presided over a meeting to examine the fallout from a provincial council decision to raise Kurdish flags in the oil-rich city.

The INA statement said the decision, irrespective of other ethnic minorities in Kirkuk, was a wrong move and contradicted the requirement to maintain Iraq's national unity.

INA also called for peaceful coexistence among all ethnic groups in the Kirkuk province.

On Saturday, the Iraqi parliament voted to ban Kurdish flags in Kirkuk, prompting Kurdish members of the chamber to leave the session.

The controversial move has been met with ire in Baghdad as Kirkuk is not part of the semi-autonomous Kurdistan region.

On Saturday, Prime Minister Haider al-Abadi warned against Iraq's disintegration, saying a potential separation of the country’s Kurds would harm them.

"That is totally objectionable. We are serious about Iraq’s territorial integrity,” Abadi said in an interview with the Iraqi Kurdistan region's Rudaw media outlet.