2017 will be successful year for Azerbaijan 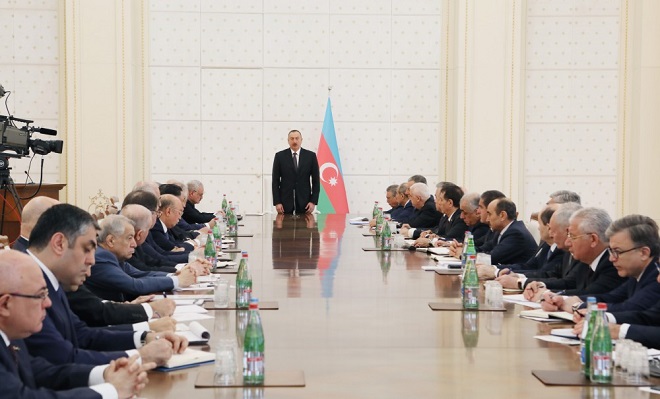 The economic development was ensured, social problems were resolved, and the military build-up was carried out successfully in Azerbaijan in the first quarter of 2017, said President Ilham Aliyev.

The president made the remarks at the meeting of the Cabinet of Ministers dedicated to the results of socioeconomic development in the first quarter of 2017 and future tasks.

The head of state noted that 2017 will be a successful year for Azerbaijan.

“The international situation remains tense. Unfortunately, conflicts are going on, new risks are emerging. All necessary measures are being taken to ensure safety in Azerbaijan,” said President Aliyev.

The Azerbaijani president recalled that he has paid seven visits to foreign countries and attended different international events since the beginning of 2017.

“These visits are of great importance for strengthening the international image of Azerbaijan and development of bilateral relations,” said Ilham Aliyev.

The president added that the heads of seven states visited Azerbaijan in the first quarter of this year. “These visits are an indicator of respect for our country,” he said.

President Aliyev stressed that the Fifth Global Forum held in Baku in the first quarter of this year with the participation of more than 40 current and former heads of state and the meeting of chiefs of General Staff of the US and Russian Armed Forces in Baku demonstrate Azerbaijan’s role as a reliable partner on a global scale.