G7 held its 'most ill-fated summit' 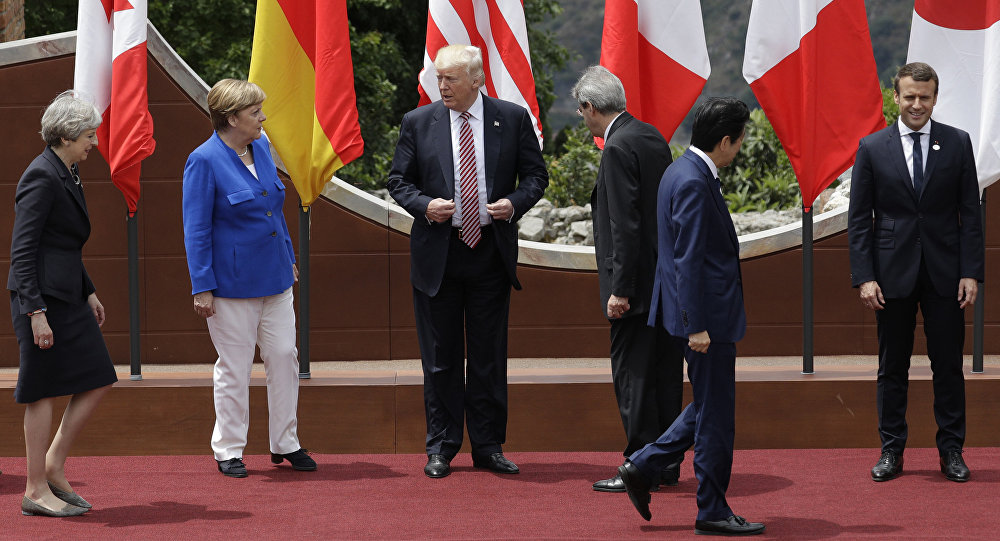 Commenting on the results of the G7 Summit in the Sicilian city of Taormina, Italy, and the remarks of Chancellor Merkel that Europe "must now take its fate into its own hands", German political analyst Alexander Rahr suggested that it is a chance for the Europeans to stop hiding behind the US and start working on their own policies.

Addressing a crowd at an election rally in Munich, Merkel said that in the last few days, she had "experienced" that Germany and other European countries no longer can "completely rely on others."

"We Europeans truly have to take our fate into our own hands," she stressed, adding that Germany and other European countries would do their best to stay on good terms with the US and the post-Brexit UK. "We have to fight for our own destiny."

Merkel's comments follow the two-day G7 Summit in the Sicilian city of Taormina and Donald Trump's bid for more time to decide if the US would continue backing the 2015 Paris climate accords.

US media has recently reported that the president had allegedly informed his confidants that the United States will withdraw from the Paris Agreement on climate change.

Russia's online newspaper Vzglyad sat down with German political analyst Alexander Rahr, director of the German-Russian Forum, well known for his insights into relations between Russia and the West, to talk on these issues.

The political analyst noted that the remarks of the German Chancellor came after the two Summits: on Thursday she attended the one-day NATO summit in Brussels, spending Friday and Saturday in Italy's Sicilian town of Taormina where the two-day G7 summit took place.

"In NATO, they have all been speaking different languages for a long time already. Some of the Europeans wanted to discuss Ukraine and the relationship with Russia. However Trump has no interest in these issues. He treats Europe as a junior partner and leaves no room for any landmark changes in the mutual relationship," Rahr told the newspaper.

All he wants is for NATO to support and, moreover, pay for the US' military operations in the Middle East, he added. The Europeans are following the US leader, grinding their teeth, he said. However they are forced to obey their chief commander as NATO will cease to exist without the US' leadership.

Regarding the G7 Summit, the political analyst said that it was the "most ill-fated gathering" in years. It has demonstrated that the group has also nearly ceased to exist. The Americans and the Europeans have a very few common grounds. The US pursues its own interest, as well as the European.

However, the world, he said, is much more complicated and there is almost no point discussing the world’s affairs between only seven states.

Alexander Rahr also noted that Merkel wanted to demonstrate that she is a world leader, but she is now forced to admit Europe's weakness against the new US leadership. It is still unclear how seriously Trump treats his European partners.

The United Kingdom, he said, remains the key European player with the most powerful army in Europe, but it is set to exit the EU. That is why Germany should now act differently. It should become more European, not Transatlantic, as it has been for many decades.

The main task for Merkel is to put the EU’s interest first, and not entirely rely on the US, the political analyst concluded.