EU asked not to show different attitudes towards Karabakh 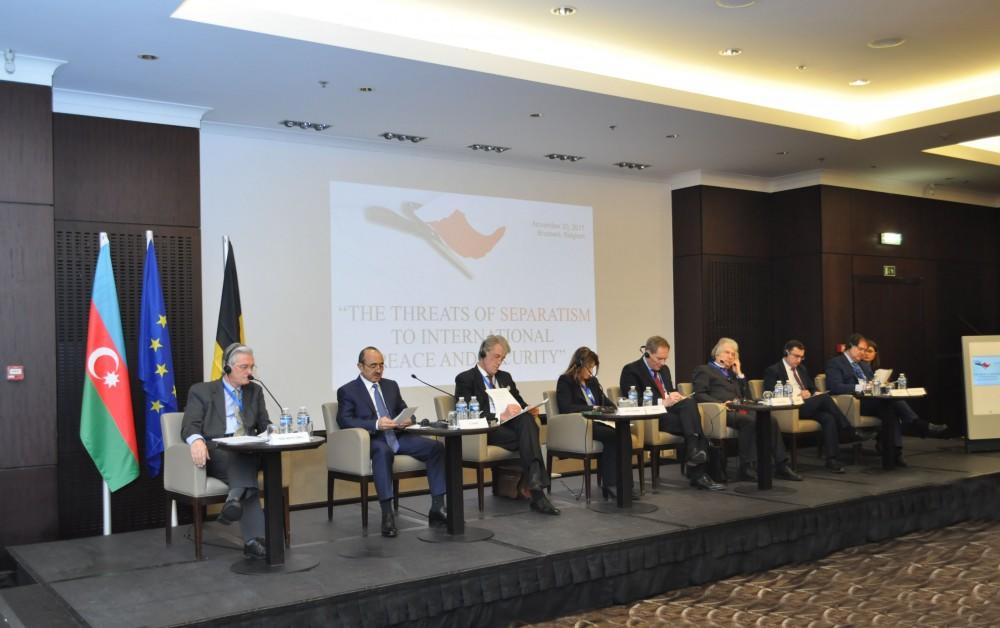 The second panel session, entitled “Separatism in Europe: Causes and consequences. Threats to Europe’s economic and political future”, was held as part of the international forum on the theme “The Threats of Separatism to International Peace and Security” in Brussels on Nov. 21.

The international forum was co-organized by the Congress of European Azerbaijanis and the Nizami Ganjavi International Center with the support of Azerbaijan’s State Committee for Work with Diaspora.

The panel session was moderated by Israel’s ambassador and MP of the Knesset Yosef Shagal, who is also the founder and President of “AzIs” Azerbaijan-Israel International Association, the State Committee for Work with Diaspora told.

Fuad Isgandarov, head of the Azerbaijani mission to the EU and the country’s ambassador to Belgium and Luxembourg, talked about Azerbaijan-EU relations.

Otto Hauser, Azerbaijan’s Honorary Consul in Stuttgart, said in his speech that separatism anywhere in the world relies on use of illegitimate violence and neutrality of centrifugal forces.

“The paradox is that Catalonia is the sole example of unarmed, peaceful separatism. For some reason, however, it met a vehement rejection from the European Union. This is because Catalonia is an integral part of the EU,” he said.

Azerbaijan is significant for Europe, said the diplomat, calling on the EU to understand its partner and support it in the same way as Spain.

The honorary consul stressed that the basis for the resolution of the Armenia-Azerbaijan Nagorno-Karabakh conflict is the return of Azerbaijani refugees and IDPs to their native lands.

Other speakers at the event also noted that separatism causes conflicts between countries and peoples, expressing their views on the ways to overcome these problems.

Then, a film about Armenian separatism was displayed at the forum.

Ephraim Sneh, chairman of Israel’s Center for Strategic Dialogue in Netanya Academic College and former Israeli minister of transport and health, the attitude towards the violation of the principle of territorial integrity changes when it comes to Azerbaijan.

“They call it the right of peoples to self-determination. Is the right to self-determination possible through military aggression? A warm attitude towards Armenia is not only a double standard, but also hypocrisy. This situation is advantageous for some and they deliberately prolong the settlement of the conflict. The Karabakh problem should be solved fairly so that further conflicts can be prevented,” he added.

After the break, the third panel session on the theme “The Nagorno-Karabakh conflict and a comparative analysis of the separatist movement in Europe in the modern period” was held.

The event was moderated by Akkan Suver.

Addressing the session, Rovshan Rzayev, Azerbaijani MP and deputy chairman of the parliamentary Committee on legal policy, said that if the international community was not indifferent to the occupation of Nagorno-Karabakh, perhaps there would be neither a war in the eastern Ukraine nor separatism in Catalonia.

Hans-Joachim Heintze, Prof. of the Ruhr-University Bochum, said that the right to self-determination can not be applied to the Armenians of Nagorno-Karabakh, as they are not a nation or separate ethnos.

“When I ask American politicians, on what legal basis they speak about the right of Karabakh Armenians to self-determination, they admit that they are under the influence of the Armenian lobby. Karabakh Armenians are a national minority and they cannot be granted independence according to international law,” he notted.

Another German professor, Johannes Rau, who is the author of several books about Karabakh, said that the Armenians have already realized their right to self-determination.

“At present, more Armenians live in the United States than in Nagorno-Karabakh. Following this logic, they must create a state there,” he said.

The German professor urged Armenia to withdraw its troops from the occupied Nagorno-Karabakh region and other regions of Azerbaijan. “There is a need to declare a general amnesty and ensure an exchange of prisoners of war. After all this, Azerbaijan can grant Karabakh autonomy,” he added.